how to close a severed artery/vein?

This is a medicine-related question that I've been wondering about. I've been watching medical lectures on YouTube regarding the human body and was wondering about how surgeons treat a severed artery or vein (think Juggular or Carotid)? Specifically I was curious about what kind of tools they use and what the technique is for performing this operation.

And before anyone asks, no, I don't need to treat someone with this kind of injury :).

I'm going to take a shot at putting a whole lot of information into a small answer, so let me know what parts need more explanation. To any others experienced with closure, I am certainly skipping plenty of steps and ideas in attempt to convey the general.

******A general warning that graphic surgical images are used below.******

You asked about "severed" jugular and carotid injuries, so we will focus on neck injuries, with a focus on insults to the R/L common carotid arteries (CCA) and the R/L internal jugular vein (IJV). To get everyone on the same page visually, we are talking about the large blood vessels in this image: 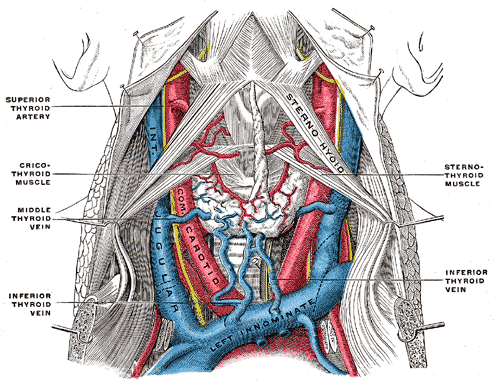 For the sake of simplicity, we will deal with injuries that are focused directly on these vessels. In reality, there are so many different and important tissues tightly packed in the neck that there are often many complications and multiple vessels that need to be dealt with near simultaneously. Further, we will suppose that our patient (pt) is unlucky to have a "severed" vessel in his neck, but lucky enough to have immediate access to ATLS.

Just like you should have learned in your basic neighborhood CPR/aid class, you address the ABC's (MD's add DE): A irway, B reathing, C irculation (D isability, E xposure). In reality when presented with a pt bleeding from the neck, you will almost always begin by applying pressure at the wound site, while you address the airway. When I say "applying pressure" I literally mean a nurse or medic putting their fingers up against where it is bleeding and trying to stop it like a hose.

We will assume that a clear airway is established, the pt is breathing normally enough, and under general anaesthesia. We will also give us the advantage of having the head, and to a little lesser extent body, packed down with ice. This will give us precious time, and help prevent brain damage. All else is presumed to be well with the pt, and all we need to do is fix the bleed in his neck.

Now that we have our idealized pt ready to fix, the first thing you have to do is to identify where the bleed is. Assuming you have serious bleeding, like one would come from a "severed" CCA or IJV that normally means cutting open the wound quickly and in a controlled manner. Again, the neck is full of tissue you don't want to damage, so a anterior sternocleidomastoid incision is normally called for when you are looking for where the CCA or IJV is damaged. As opposed to coming from the top the way we would dissect a cadaver (as in the drawing above), the sternocleidomastoid incision will give us a side view into the neck like this: 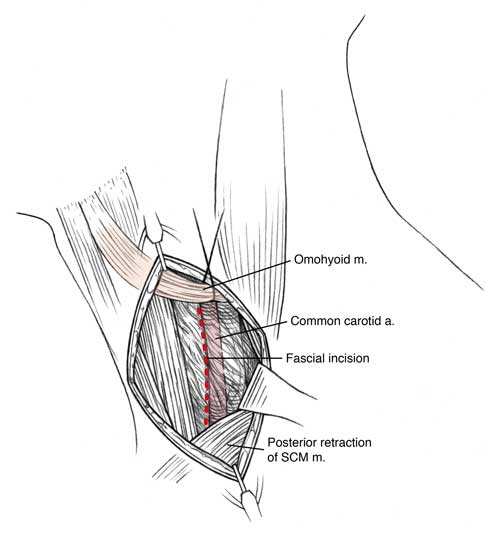 The point at this stage is to gain control of the bleed. You don't want to just go digging in where the vessel is bleeding, because you are likely to cause more damage than help (and in this case, loose the pt). Instead you are going to clamp above and below where the vessel is bleeding. This will let you suck out the blood and see what's going on. If you happen to have a large wound in a large vein, there's a chance that a clamp won't give you sufficient control of the bleeding. In that case you have to also use a catheter to stop the bleeding (in obtaining distil control to be specific).

In our case, this means dissecting the carotid sheath. This needs to be done very carefully so that you don't damage the vagus nerve.

You may have noticed I kept putting "severed" in quotes. That's because it matters how the vessels are damaged. Were they crushed or ground apart? Cut jagged or cleanly? Transverse or longitudinal? All of these change the exact procedures into how you go forward. Clearly a vessel that has a small tear is easier to repair than one that has been totally separated with jagged shredding from a crush injury. Veins and arteries won't retract from the insult in the same way either, so how you find them can be a bit different. Here is a flow chart that shows the basic decisions:

Put it back together Doc: [warning of graphic images]

You may notice that there are basically two end points for either veins or arteries: repair it or ligate it. There are many different technical/specific ways either can be done, but those are beyond the scope of this answer. If the sight of open wounds bothers you, note I am going to start using actual surgical photos below.

When it's possible it's better to repair the vessel. That means that you can close the artery where it is. If there is just a small hole, you can suture the hole closed. With the CCA or IJV it's more likely that you are going to need a patch. This means that you take another piece of vein or a synthetic replacement, and suture it into the hole. I always like to tell people surgery is a lot more tailoring than most people realize (not that this is as easy as sewing fabric). Below is an example of where a patch would be used in the CCA:

First the tear in the artery: 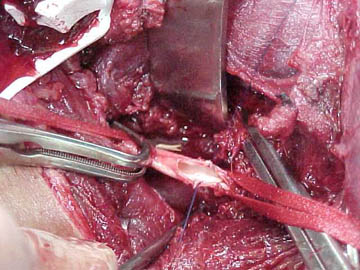 And after the patch has been added: 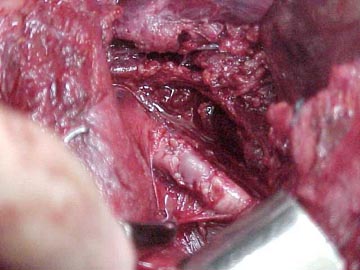 Suturing and patching can only be used to close the vessels when tension isn't needed to repair the wound. If the laceration or severing of the vessels are such that it has come mostly (not completely) apart, but you can still get the ends together with NO tension, end-to-end anastomosis repair can be utilized. This means that you take the two ends, with branches if there are any at the wound, and suture them back together.

Again here is an example of the opening in the artery (popliteal): 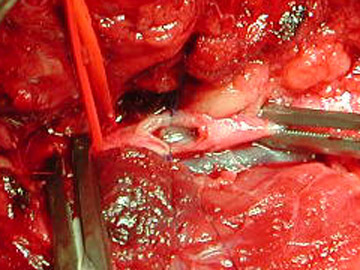 And here it is again after end-to-end anastomosis repair: 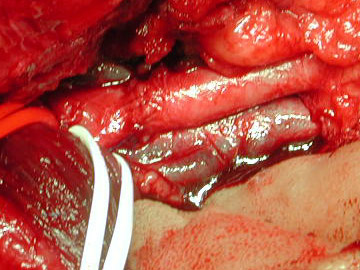 Now let's say that you really did get the vessel cut in half. That's a bit of bad news for you, you're going to have to ligate the vessel. That means sewing up the end of it to close it down. You start above the injury in arteries and below in veins, and then you tie at least three loops--many prefer five loops--down on the vein, and make a clean cut leaving at least two loops on the part staying in the body. Then you do the same thing on the other side of the injury. I think this is best displayed by a video, unfortunately most of the good ones I know of are not available to the public.

This video certainly not the best technique I've ever seen but it get's the idea across. I will search for a better video as I have time.

Now if it is possible, a surgeon will try to make a graft deal with the ligation. The first choice is a interposition graft. This means taking a larger vein graft and connecting the two ends of the severed vessel. You do this after making clean ends with the ligations from above.

Here we have the femoral artery prepped for an interposition graft: 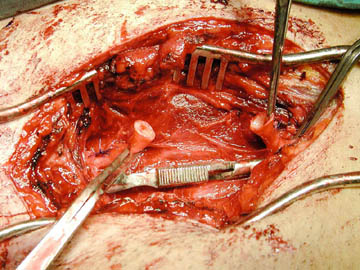 And here is interposition graft in place:

In certain cases, this is not possible. As strange as it sounds, the ligation may just be left in place, depending on where it is.

No, not by a long shot, but that is the basics. There are many different techniques that can be used, with new and better ones being invented often. For example instead of suturing, chemical cauterizing of the ligation can be used and is quicker. That also allows the surgery to be done through a scope. But the basics remain the same:

Stop the bleeding, gain basic access, get full control of the bleeding, obtain full exposure/access, sew up the problem, put everything back, close up, give fluids, and send them to ICU. Even after getting everything right in surgery, the recovery can be quite difficult.

Note: I will try to come back with primary sources, I started from knowing what to do and searched for sources. Here are two great sources which contain more complete information:

1) Trauma.org This is a great site for use by actual medical professionals when addressing trauma. They don't really cover the basics, but they do give wonderful care write ups. Here is the relevant reference for this answer:

2) Acssurgery.com Even more than Trauma.Org, this site is designed for use by clinicians. Relevant reference:

14
How are Maggots Sterilized (Disinfected)?
0
Help me understand how the thyroid secretes
5
How does vasoconstriction/vasodilation change blood pressure?
3
How does hyperthyroidism cause diarrhea?
1
How is Pseudomonas aeruginosa diagnosed?
1
How does the age of a parent affect the chances of occurrence of certain genetically transmitted diseases?
0
How do tapeworms aid weightloss?