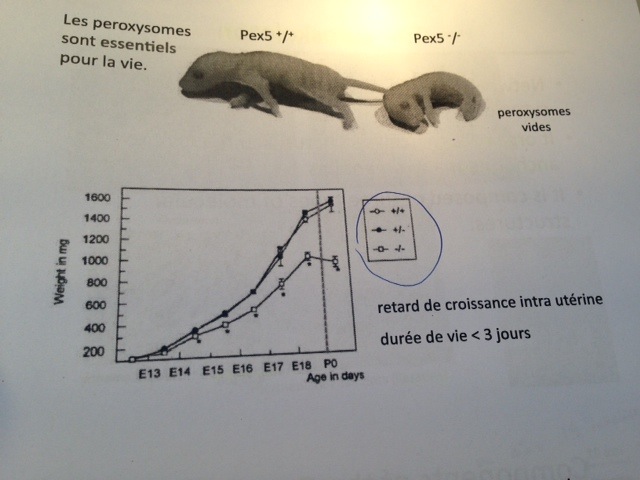 I don't understand what this graph is supposed to explain, especially what the signs +/+ or -/- mean. I just know it characterises some rats.

Diploid organisms, such as we are, generally have two copies of each gene (excepting the sex chromosomes in males). In order to display the genotype for each, geneticists use shorthand. When referring to a gene, + means the wildtype, which is the "normal" version, and - means that the gene is missing, often a knockout. So a typical individual's genome for a particular gene will be +/+, a hemizygote (one copy deleted) is +/-, and a complete knockout is -/-.

The image is talking about peroxisomes, claiming that they are required for life, specifically the gene Pex5. You can look at the graph at see that compared to the wildtype (open circles), the -/- individuals (open squares) don't make it to a normal birth weight; their lifespan is less than three days. The +/- hemizygotes (filled circles) match the +/+ wildtype, indicating that this locus displays haplosufficiency, which means that only one functioning copy is needed for a typical phenotype.

9
What do the variants on the PolyT sequence mean?
4
How do I interpret this graph regarding introduced genes and virus-infected cells?
5
Doubt on genomic code for nucleosome positioning?
5
what is linkage disequilibrium supposed to measure?
0
Genetic notations
2
What does "melanistic phase" mean in regards to black jaguars?
2
What does "Origin" mean in NCBI GenBank?
1
What exactly does the phrase "chimerical sharing" mean in this abstract?