Does knowing the sex of each of a couple’s first N children have any marginal value in predicting the sex of child N+1? By “marginal” I mean predictive power beyond other known effects, e.g., the race of the parents, the mother’s weight, season of birth (list from this presentation by Andrew Gelman).

I know that many claims that some variable can predict a child have been accused of resting on shaky statistics (see the presentation linked to above). But the sex of preceding children seems like it could be a strong predictor.

Can you expand on why (by what mechanisms) you think that it could be a strong predictor? Male sex-chromosome bias in sperm?

Yes, sex-chromosome bias was my first thought. I almost focused my question specifically on that but the fact that I saw maternal weight listed as a predictor in the Gelman presentation made me think there might be other relevant factors that I wouldn't think of. So I broadened the scope of the question.

For those who are interested in sex ratio bias itself, the enWikipedia article is pretty good.

As for predictive power, a Bayesian might tell you that by knowing a couple can and did have a male/female should improve, if only slightly, your belief that their next would be the same. It's by no means predictive and probably largely indiscernible from random chance, but hey it's something!

More to the point, at the very least you might as well just guess their next child will be a son. As the link above will tell you, the human sex ratio at birth has varied but in general males are more likely to be born - somewhere around 1.03 to 1.08 males per female. Here's another in-depth study, from 2005, dealing with the last few decades in the US. 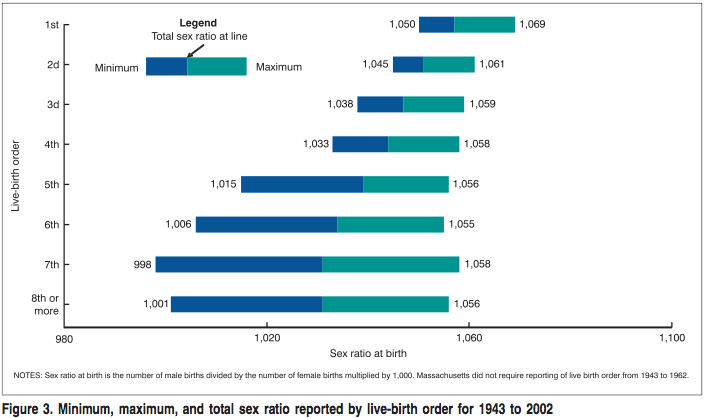 Those numbers are way more clear than I thought they would - just watch those means move! I wish there were more information on the variances - clearly there's more down by the 8th child - but that's pretty solid. Here's another study from Denmark in 1999 doing some of the same stuff (Denmark was popular for this work). They include the absolutely fascinating Table 2 (below), which breaks down the odds of giving birth to a male given whatever came before. Which, in the end, is as predictive as you can get, right? 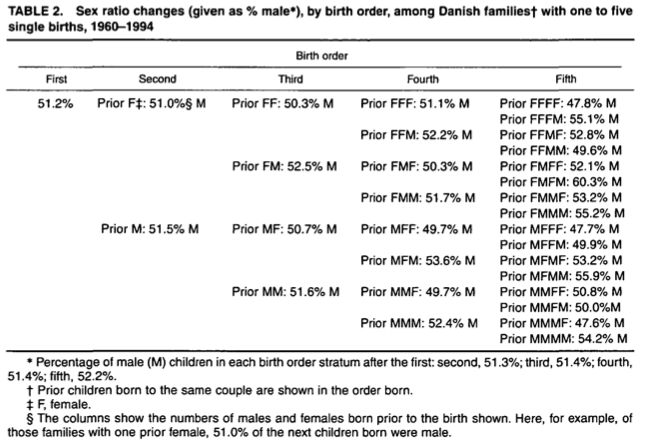 Basically, it's sort of what you'd expect: the more females you have, the more likely you are to have another female; the more males, the more likely the next is a male. They used about 1.4 million kids but there are some interesting oddities in that table at the extremes. The best chance for a male? Your fifth kid, following FMFM. Best for a female? Your fifth, after MMMF.

There are some definite issues that can twist the data, particularly when families have another kid to try to get a child of a specific sex. If you can tease out some of those environmental factors, you'd be better at guessing; still, I wouldn't bet the house on it. Memorize that table but, when in doubt:

An analysis of data from about 8 million births shows that there is positive correlation. Please see http://biorxiv.org/content/early/2015/11/16/031344

Not the answer you're looking for? Browse other questions tagged human-biology sex-ratio or ask your own question.

5
How can the child and the mother have different blood types?
4
Does homeopathic or herbal treatment of cancer have any scientific recognition?
3
Does alcohol really do more damage to the body of a child compared to an adult?
2
Is there any biological basis for the emphasis on the value of the firstborn son?
0
Why does the right bundle branch not have any terminal filaments in the IVS of the human heart?
2
What do we mean by MHC molecule diversity? Does each human have a variety of MHC molecule isoforms?