Microarray has various uses, and to analyse the data a main function classification is used. There are many methods used to classify the data but what are the best and most frequently used methods? Are there any well-known, web-based tools for microarray analysis? Where can I find datasets of gene expression profiles, where I can find and understand the matrix of the dataset?

This is a fairly broad question and a book or two will give a more complete answer. I'm assuming you are interested in expression microarrays. Genotyping microarrays are also very popular these days and are quite different though.

Where can I understand the matrix of the dataset ? This is a little unclear as a question, but I'll start with a numerical description. Microarray data is reducible to a one dimensional array of intensities. As a vector of numbers, each representing the amount of a given species of RNA in a sample, it has many interpretations. Most of what is said here applies to RNASeq data too.

These numbers are sequence dependent - that is, they should not be interpreted as an absolute count of a specific mRNA in the sample, so comparing two entries in the vector (e.g. "gene A has 10% more RNA than gene B") will probably not be useful.

For this reason, microarray experiments are typically done as difference experiments, where two or more conditions are compared, producing a matrix of numbers, where N rows represent N experiments, and the M columns each represent a probe set / gene. The transpose of this matrix is also common.

**Methods to classify microarray results. ** Taking the matrix of data, there are many ways of interpreting data in matrix form and most of them have been tried credibly with microarray data.

The most common are to take a set of probe sets whose biological action are related (e.g. all in a metabolic pathway and display them as a heat map where the columns have been clustered by a distance based algorithm to produce a tree, where neighbors have the greatest numerical similarity. 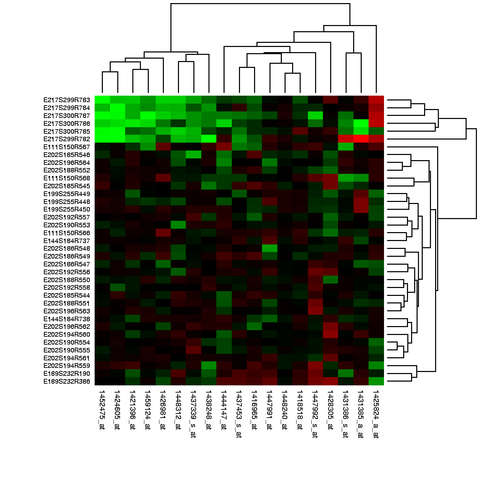 For purely numerical methods, Principal Component Analysis is often used (despite the fact that this is not a great method), but Self Organizing Maps, neural nets and just about any machine learning algorithm have been used.

Most common method by far though, is Analysis of Variants (ANOVA), where the probe sets/ genes have been scored by their greatest to smallest variance. The most common case of this is a two condition difference experiment where the largest differences are taken as results. This is not a great experiment, but the data is not super cheap to produce.

**Microarray data repositories ** Gene Expression Omnibus (GEO) is a highly regarded repository for microarray data, with over a million sets of data. They also have some tools, see below.

There are many many specialized microarray websites, mostly focusing on a particular organism (E coli for instance) or problem (like cancer). Google is pretty helpful for this sort of thing once you have the right keywords.

GEO2R is a great tool to browse expression data experiments. It does a simple version of ANOVA and will really help you find some cool biology quickly.

VAMPIRE is a web analysis suite for microarray analysis. Scaling the data into numbers from images to intensities to data analysis to compare several arrays. Its probably one of the most comprehensive analysis sites out there.

Not the answer you're looking for? Browse other questions tagged genetics dna microarray or ask your own question.