What is the difference between local and global sequence alignments?

There are a bunch of different alignment tools out there, and I don't want to get bogged down in the maths behind them as this not only between software but varies from software version to version.

There are two main divides in the programs; some use local alignments and others use global alignments. My question is threefold:

I shall give the example of the well known dynamic programming algorithms. In the Needleman-Wunsch (Global) algorithm, the score tracking is done from the (m,n) co-ordinate corresponding to the bottom right corner of the scoring matrix (i.e. the end of the aligned sequences) whereas in the Smith-Waterman (local), it is done from the element with highest score in the matrix (i.e. the end of the highest scoring pair). You can check these algorithms for details.

You can adopt any scoring schemes and there is no fixed rule for it.

Global alignment is when you take the entirety of both sequences into consideration when finding alignments, whereas in local you may only take a small portion into account. This sounds confusing so here an example:

Let's say you have a large reference, maybe 2000 bp. And you have a sequence, which is about 100 bp. Let's say that the reference contains the sequence almost exactly. If you did a local alignment, you would have a very good match. But if you did a global alignment, it may not match. Instead, it may look for matches throughout the entire reference, so you'd end up with an alignment with many large gaps. It does not matter that it matches near perfectly at one particular region on the reference, because it's looking for matches globally (i.e. throughout the reference).

Take look to the attached image file. It will clear your doubts about 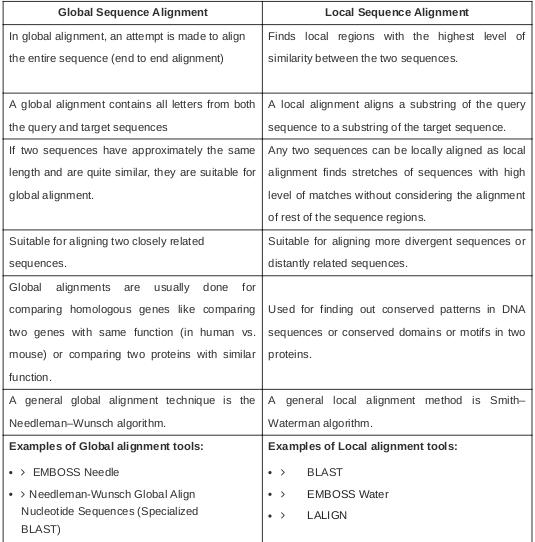