What is the morphological difference between Leydig cell in human and pig?

The pig is only an example, just an animal. Leydig cells have protein inclusions (Reinke crystals) that are mostly made of crystallised lipofuscin. They are secretory inclusions i.e. cells formed in secreting cells.

An example of Leydig cell in pig's testicle: 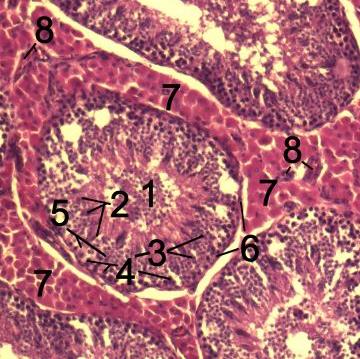 What is the morphological difference between Leydig cell in human and pig?

Perhaps what your teacher meant was not so much a difference in Leydig cell morphology, but in interstitial tissue morphology, ie. tissue which occupies the space in between seminiferous tubules. Leydig cells are its most interesting component, others being small blood vessels (a lot of them), nerves and connective tissue (mostly fibroblasts, mastocytes, lymphocytes and macrophages). In different species interstitial tissue looks differently, for example:

I found all this in some old lecture notes; I couldn't dig up any sensible reference, though.

I have studied all available (via University library) literature on the Leydig cells and I think your teacher might have this article summarizing the morphological studies on Leydig cells in different animal models in mind.

To put it straight, the most common animal models for studying Leydig cells are rats, mice and pigs.

The development of Leydig cells in rats was shown to be bi-phasic: development of the Leydig cell population in fetus and its degradation while transforming into the mature cells. It has been believed for quite long that this is also true for human Leydig cells. However, some studies performed on pigs and monkeys delivered an evidence for an additional phase of cell degradation sometimes between the fetal and neonatal development shifts. These data are summarized on the following Figure (taken from the referenced paper): 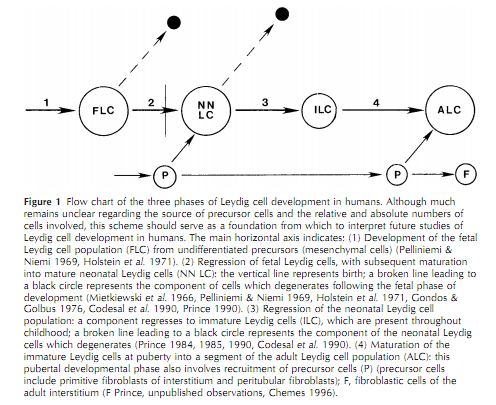 So, by comparing the Leydig cells of rats and humans from the same fetus age or shortly after the birth (neonatal time) you might see the degradation of Leydig cells -- they decrease in size and many of them eventually die -- compared to normal state of these cells in rats.

Not the answer you're looking for? Browse other questions tagged anatomy histology or ask your own question.

3
Is there a difference between pig and cow anatomy that makes religious slaughter of the latter less painful?
3
What are the exact differences between stereocilia and microvilli?
2
Does size matter?
0
what is the exact definition of entdothelial cell fenestrae?
2
What are the differences between the margins of the lateral and medial condyles of the tibia?
5
What fills the space between the alveoli in the lungs?