What will happen if we expose the brain to intermittent light?

If a brain is exposed to an intermittent light source, are specific areas going to fire? If yes, which of them? Is there a experimental data about this effect?

It is thought that there are no active optical receptors in the brain normally, its possible some effect might show up in the future, it would be minor at best.

Shining light into the brain is standard procedure in optogenetics experiments. A subpopulation of neurons is transformed to express an optical receptor to modulate genetic or signalling properties of the cell.

So the reason I say it would be small effect on a native brain is that these experiments do give good results and are run with controls which do not have the optical receptors added, which typically show no change in brain activity. 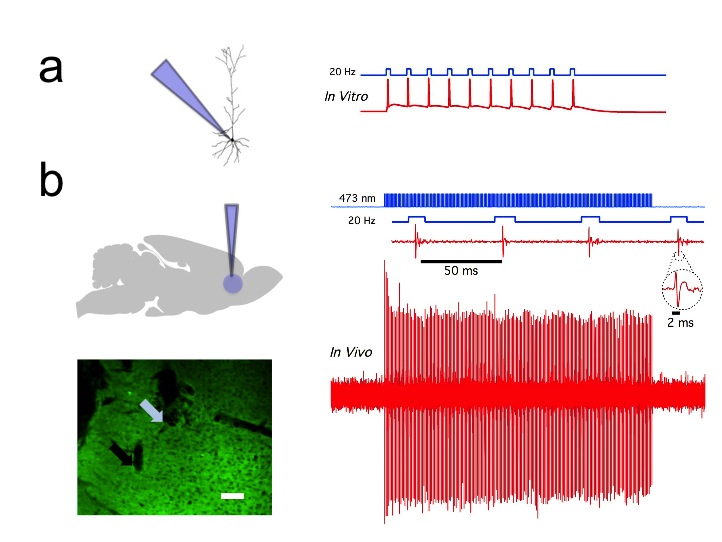 Image taken from the linked Wikipedia page and originally from Baratta et al..

Short answer
Illumination of neurons with light of varying wavelengths can activate them, causing them to fire action potentials. It may, however, not be the photons that activate the neurons per se, but the resulting temperature changes.

Background
In contrast to the comments and original answer, it is possible to activate neurons, other than photoreceptors, with light.

The underlying mechanism of laser-activation of neurons is debated. The current evidence points to the possibility that focal illumination of neurons with light may increase the temperature of the cell, which may result in changes in membrane capacitance. Changes in membrane capacitance can cause voltage differences. Hence, lasers may induce action potentials by causing heat-induced depolarizations. Further, it is thought that temperature changes affects transmembrane ion channels and TRPV channels that in turn play a modulatory role in the laser-induced activation of neurons. TRPV channels, for example, include the heat-sensing TRPV1 receptor, that is thought to be activated by laser light-induced temperature changes (Thompson et al., 2014).

Why the fuzz about laser-induced neuron activation? Cochlear and retinal implants restore limited auditory and visual function in the deaf and blind, respectively. In both techniques, electrodes are used to activate spiral ganglion cells (in the inner ear) retinal ganglion cells (in the eye). Electric currents have the tendency to spread laterally through the tissue, preventing focused activation of specific localized regions of the cochlea and retina, respectively. Hence, both approaches suffer from channel-channel interactions, leading to crude stimulation profiles and reduced frequency resolution (cochlear implants) and low spatial-resolution (in case of retinal implants). Lasers, on the other hand, can be made into nearly infinitesimally small rays that have minimal scatter compared to electric current spread. Hence, laser-induced activation may be useful for specifically stimulating small populations of neurons in a certain tissue, opening up great possibilities in neural-prosthetics, such as auditory and visual prosthetics (Rettenmeijer, 2014).

15
Are there neurons that can sense light shining in your ears?
3
Is “tonic activity” common for neurons firing in the brain?
5
Does playing music during sleep actually suppress rather than rouse the brain?
4
How is information sent from the skin to the brain?
1
Do individual neurons communicate with the origin of thoughts?
1
How does the brain manifest and realize the intention to resist sleep?
2
Synaptic connectivity in the newborn's brain
2
What are the response frequencies of sensory neurons?