Why would a single celled organism evolve to be multi-celled?

I read a story this week on Richard Lenski who has been 'evolving' E. coli for more than 50,000 generations now. One comment I read was from someone who doesn't accept Evolution who pointed out that we haven't seen a single celled organism 'evolve' into a multi-celled organism. Another person responded and said that a bacteria is not going to evolve into something that isn't a bacteria.

So, if Evolution created single celled organisms and then multi-celled organisms how might that change have happened? And is it possible to recreate that set of driving forces to make a bacteria something other than a bacteria?

To that end, what advantage does being multi-cellular have over being unicellular (if that's even a word)?

How did multicellularity evolved?

This is a big ongoing field of research. To start with an example, there was relatively recently (2012) an important article by Ratcliff et al. that shows that yeast can quickly evolve multicellularity under selection on the speed they sink to lower water layers. This article is one among many others and is far from being able to explain everything we would like to understand about the evolution of multicellularity. Typically, I think that this yeast species had a multicellular ancestor and we might think that this species would already have fixed alleles (=variants of genes that is fixed meaning that the whole population is carrying this variant today) in the population predisposing this species to easily (re-)evolve multicellularity. Also, they may have kept some standing additive genetic variance in their genome from their past and they would therefore very quickly respond to selection as they don't need de novo mutations. (Sorry if this last sentence was slightly technical).

One of the first traits that we usually refer to when talking about the evolution of multicellularity is the presence of sticky proteins allowing individual cells to paste to each other.

What do you mean by multicellularity?

How many times did multicellularity evolve independently?

There are a bunch of specific clades that are particularly interested in studying multicellularity because they present transition states. For example Volvox is a chlorophyte genus and the species in this clade present different stages of multicellularity; Some species are exclusively multicellular, some form small groups, some create big colonies, some have some division of labor and some even have separation between the germline and the soma (Some castes don't reproduce). (ref1, ref2, ref3, ref4, ref5, ref6). Yeasts are also a good model organism for studying the evolution of multicellularity.

For one thing, larger organisms are much more energy efficient. This is what is known as Kleiber's Law where the caloric requirement scales as the 3/4 power to the body mass.

Another thing is that when all the cells cooperate to form a multicellular organism, each given individual is more likely to reproduce and less likely to die due to environmental variation because cooperation creates stability.

There are several theories about how this came about,but those are the elements of why. Collaboration and efficiency improve the chances of survival, which is to say that selection will favor multicellular organisms however they came to be.

Disclaimer: Not my field of research, and not a field where I know the litterature well. See it as a complement to the other answers.

A distinct advantage of multicellularity is specialized functions of different cells. This can allow for higher efficiency of e.g. metabolic processes, and also that redundant functions can be removed from some cell lines, since they can be handled by other cells. Therefore, the constituent parts can become simpler, while the resulting organism becomes more complex at the same time. Mathematical modelling of cellular systems have shown how this type of division of labour can evolve from unicellular lines (Ispolatov et al. 2011), through the steps of aggregation and differentiation from preexisting functions.

I STRONGLY encourage to read work from the lab of Nicole King - she studies Choanoflagellates, which are the "out-group" for animals - they are, in some sense, the most animal-like single-celled organism that exists.

Chaonos are also amazing because they go through a single to multicellular transition in there own life cycle, so they provide an amazing opportunity to understand when it is more beneficial to be single-celled vs. multi-celled. Currently, one of the working hypotheses of the group is that one of the main drivers of the push towards multicellularity may have just been simple fluid dynamics: the flows around a spherical multicellular "rosette" of chaonos bring more food to them.

If you are interested in the evolutionary transition to multicellularity you must read work from the King Group.

If single cells are capable of surviving on their own then why did multicellularity evolve?

This situation can be compared with the evolution of family and society, in a way; during the time of crisis, the survival chances increase when someone stays in a group.

One of the complex kinds of microbial colonies is biofilm. In a biofilm different "regions" of the colony have different kinds of functional roles; the "outer" cells take up nutrients for the colony from the surroundings whereas the inner cells reproduce and keep the colony thriving. Bacteria have also evolved a way of signalling (or "talking") to other bacteria (of the same species) by a mechanism known as quorum sensing, which in a way changes the behaviour of the bacteria when then stay in a group.

Dictyostelium or slime mold (or affectionately called dicty :) ) is an example of early evolution of multicellularity in eukaryotes. When there is plenty of food, dicty stays as unicellular amoeba. However, when there is a shortage of food, the dicty amoebae start grouping up and give rise to a multicellular "slug". The dicty slug roams around and when it encounters right conditions (such as humidity), it differentiates to give rise to a "fruiting body", which more or less looks like a fungal spore. In a fruiting body some cells form the spores (which will produce new dicties) whereas some cells form the stalk (which supports the spores). Apparently, the choice of what part will a cell become, is random and at this stage the individual dicty amoebae are no more selfish. The aggregation of dicty amoebae is co-ordinated by a signalling molecule called cAMP and this works in a way similar to quorum sensing. 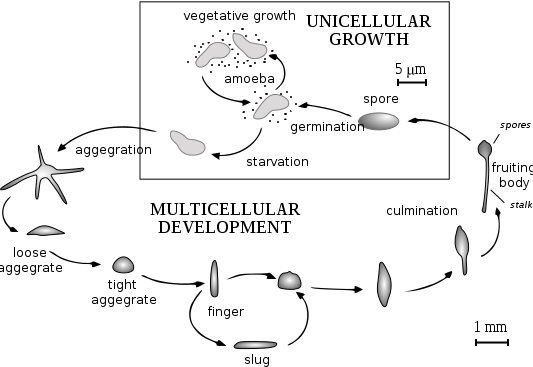 Volvox is another example of an early stage of multicellular evolution.

To sum up, as you said single cells can very well survive on their own. However, in some situations being multicellular would have given the organism some survival advantages. You should understand that this is just one of the survival strategies and not all organisms needed to adopt this. In fact, there are many more unicellular species in the planet compared to the multicellular ones.

I would reiterate Remi's suggestion that you should have a look at this site called Understanding Evolution, hosted by UC Berkeley.

You can also look at this post on our site about a recurrent doubt faced by many students and non-experts in the area of evolution: "Why do some bad traits evolve, and good ones don't?"

For the same reason that sociality evolved so many times among animals. There are lots of advantages in having similar fellows. And multicellular organisms are, after all, just a colony, sometimes a society, of individual cells.

The eucaryote that became the modern organelle mitochondria, combined with procaryotes. This probably occurred as a result of the mitochondria being absorbed by the parent cell but not destroyed as it usefully created energy rich ATP molecules using Oxygen and Water through respiration.

These were the first Eukaryotic cells, they went on to become Eukaryotic, multicellular life.

The volume to surface area of a cell gives cells a natural size of a few micrometers. Larger single cells find it increasingly difficult to absorb enough nutrients or oxygen for the volume of there cytoplasm.

Amoebas can be larger due to being so irregular in shape, this ensures that so nowhere inside the cell is it too far from the cells surface. Various more spherical centimetre scale single celled life also exists in nutrient rich parts of the deep ocean, such as the Valonia Ventricosa.

Another advantage is that structures can form between cells, outside of the cell walls, that can still be protected inside the creatures body. Such a connective network in animals called the extracellular matrix.

Note that creatures like the sea sponge are multicellular, but do not have distinct areas of the body such as organs in the same way as animals do.

"The genes I discuss in my article were not present in the common ancestor of all life on Earth. They do not exist in bacteria, for example. They do not even exist (as far as scientists know) in sponges. Only after the ancestors of cnidarians and bilaterians diverged from sponges did they emerge." (A planet of viruses, Carl Zimmer) This is the quote I could find, as I remember, relating to "bodybuilding" in many creatures, but not the sea sponge.

Not the answer you're looking for? Browse other questions tagged evolution cell-biology or ask your own question.

4
Is scalable growth the main reason why Darwinian systems select Fibonacci sequences?
5
Is there an ideal evolutionary body?
0
How have single-celled organisms learned to survive?
1
Is it true that it is mostly impossible, for any kind of antibiotic, to succeed in killing off every bacteria in a very rich environment?
1
What did the evolution of multicellular animals look like?
0
Is there any checked case of “involution”?
0
Does natural selection still increase biological complexity?