Problem with bacterial transformation with electroporation

I have a problem with a bacterial transformation of a yeast gene that I can not solve.

I isolated yeast DNA and did a PCR to get my product. I am using pCGCUm vector with a GFP construct. I digest both my plasmid and my product with SmaI and ClaI for 4h each. After that I purify the product from a gel and perform a ligation with high efficiency T4 ligase for 30 minutes at 22°C. Then I transform my electrocompetent cells with electroporation (2000V, 5ms), recover it in 0.5ml LB for 2h and plate it on LB-A plates.

First time I only did:

and it did not work (empty plates for insert and confluent growth (after 18h) of some weird colonies on EV).

This is what I did:

The negative control suggests that my competent cells are ok, at least they are not resistant to AMP.

What confuses me is that even with positive control I get some weird big colonies - if I got nice transformants here I would assume that either digestion of ligation was not successful, but now I doubt that).

Another thing that is weird is that now I got that colonies also on my insert2 plate.

The scan image of big colonies looks like that: 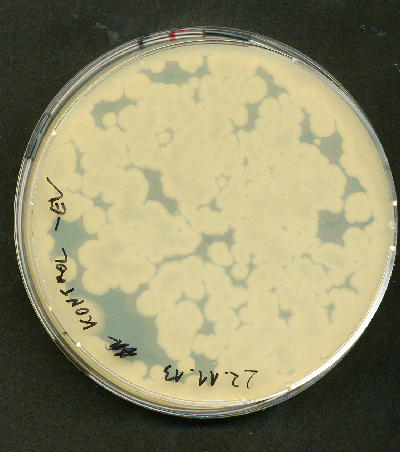 I have a question if anyone has had that kind of colonies? I was thinking of maybe having contaminated cuvettes for electroporation but I had them in 100% EtOH for 3 days and then dried in fume hood for 3 hours before electroporation.

I did try another transformation:

The good thing is that on chemically competent cells there is no weir colonies, however efficiency of transformation was very low, but still, I think it is ok - will confirm it in next day if I really got the right insert.

On the other hand my electroporation still did not clear out. I got colonies on both our cells and cells from other lab, however in much lower amount there. I will try to change the cuvettes and try to use different electroporator as this seems to be the only thing that could make problems - although I am still not convinced about that :)

Thank you for your help and I will report the progress so if somebody else will have that problem again he could maybe benefit from my findings.

Not the answer you're looking for? Browse other questions tagged lab-techniques ecoli protocol transformation competent-cells or ask your own question.

4
How does blue white screening work in selecting E coli that have taken up a plasmid vector?
6
How does heat shock transformation work?
3
What is the best current understanding of how yeast transformation works?
4
blue/white screening - results are opposite as expected
4
Can Bacteria Repair Dephosphorylated Plasmids?
4
Cloning problem. Digestion test at the end of the cloning is always negative
1
Heat shock vs electroporation
4
How does the DNA cross through bacterial cell wall during electroporation?