Is it safe to look at infrared LEDs?

What happens if one looks directly at infrared LEDs? Sometimes I see this kind of LED at night as red dots and I'm also courious about it.

I was wondering what would happen if one looks directly to these LEDs, because we see them everywhere like in remote controls, CCTV cameras, sensors, etc.

What is the difference between infrared and visible light to our eyes? (I mean why is it impossible to look directly to visible light while we can look to infrared?) 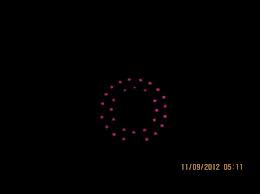 Because of this, Visible light has the ability to excite organic receptor molecules in our eyes called Rods and Cones. These molecules stimulate cell responses and in turn excite cell responses in our nerves called an Action Response. Still unclear to most scientists is how the brain composes these action responses into an image, though a great deal of research is being done to date.

The reason why "nothing happens" when we aim infrared lights into our eyes (which I still wouldn't suggest) is that the photoreceptor molecules that we use to see don't have the necessary bonding configuration to accept the energy from these impinging EM waves.
However, don't go thinking that nothing happens. Infrared radiation is a type of radiation that is usually a measurable heat source. IR is one of the broader parts of the EM spectrum. My point is to say, that when you "radiate" some thing with an IR source:
1) You don't know if it is also radiating other EM waves unless you know the specs.
2) You're still exciting molecules with that energy even if it isn't causing a seen effect. I highly doubt anything will happen unless you have a very high powered IR source. You shouldn't really ever focus high power lasers of any source onto your body, because higher intensities could inflict damage.

here's a similar question. some studies say that it may cause cataracts if you see enough of them, also the eye may receive a lot of a wavelength while dilated. that's a technical thing about sunglasses, if a sunglass dilates your pupil but IR flashes through the seams, technically it's not perfect. Could there be any effects from low powered infrared being used to track eye movements long term?

3
Could there be any effects from low powered infrared being used to track eye movements long term?
3
Is Near-infrared focused light safe for your eyes?

8
What causes light to be brighter in the corner of the eyes?
4
Are insects attracted to near infrared light?
1
Is it safe to look indirectly at the Sun?
6
What do blue cone cells add to visual function?
7
Question to the color scientists
25
Why does my room suddenly look 'reddish'? My eyes seem to adapt to color
2
What photoreceptors are necessary to permit infrared vision?
2
Why is 450 nm monochromatic light perceived as blue or violet depending on its intensity?