Under what conditions does the body burn fats, proteins and carbohydrates?

Searching the internet, I have found lots of conflicting information from various fitness sites concerning when the human body burns fats, proteins and carbohydrates.

My basic understanding was that the body will first utilize glucose and glycogen stores, followed by fats and finally proteins once the fat and glycogen stores become depleted. Also I believe there is some overlap in this process.

However many fitness websites claim that during high intensity physical activity, the body will prefer to burn protein over fat.

Scientifically speaking, when does the body ordinarily burn the following food groups (proteins, fats and carbohydrates) and how does exercise influence this process?

If you are able to provide graphs or data to back up your answer this will be extra helpful because I am bored of all the speculation I see on other sites.

The system that regulates body energy store consumption is hugely complicated, but is mainly a cooperation between hormones released by the pancreas (insulin - lowers blood sugar and glucagon - raises blood sugar) and the liver (as the bodies main glycogen store and factory for various energy related tasks).

In the fed state (high blood glucose e.g. after a meal), the body produces a large amount of insulin. When the ratio of insulin:glucagon is high (≈0.5):

Where the insulin:glucagon ratio has dropped to around 0.15

If there has still been no glucose intake, the insluin:glucagon ratio falls even further, to around 0.05.

This process can continue for a number of weeks, with the body eventually exhausting fatty acids in adipose tissue and being unable to produce ketone bodies in the liver, losing the inhibition of proteolysis causing a last ditch response of muscle breakdown for energy. Death is usually from heart failure resulting from cardiac muscle breakdown.

This chart might be useful in summary, it shows where the glucose levels in the blood are coming from at various stages, the gluconeogenesis line indicating protein and fatty acid breakdown: 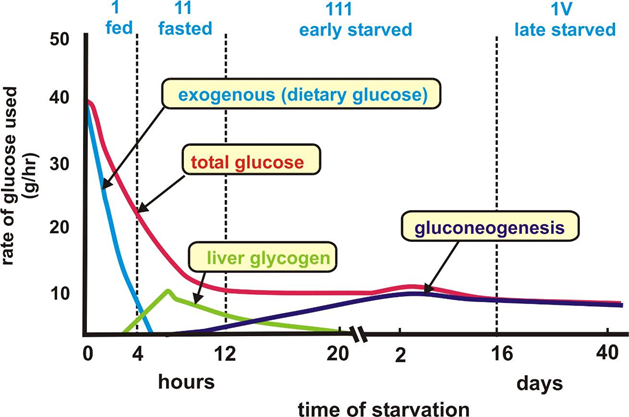 Exercise has to be very intense to have any effect on this system in normal situations.

One example of where this may be more noticeable is during a marathon.

Not the answer you're looking for? Browse other questions tagged fitness or ask your own question.