Is there any genetic similarity that defy evolution theory?

In other word, we won't expect genetic similarity that don't "cross" the common ancestor or the evolutionary tree.

That being said, am I correct?

Some people say that we have similarity with pigs and chimps even though our common ancestors may be to far off. That won't happen right?

I expect that evolutionary tree will form a well, tree. Genetic similarity would infect "nearby" trees and can't jump between trees without connectors, such as common ancestors.

Is that what we observe for ALL species?

Your question seems rather confused to me, I don't quite understand it. Below I try to explain some stuff, I am not quite sure it would help you finding the answer to your question. Let me know if it helps you and how I can improve this answer.

While natural selection selects for a given allele (gene variant), mutations create new variation. And because of this process of mutation there is genetic pattern in species D that would cannot be found in species B (assuming that we have the DNA of species D). But what is similar between B and D were probably also present in their common ancestor B. The exceptions are molecular convergent evolution and horizontal gene transfer (natural of artificial).

Because of common ancestry … 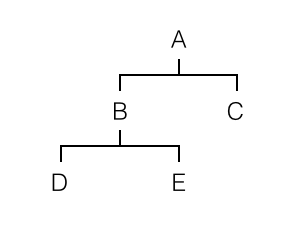 If you might observe that D is genetically speaking more similar to C than to E… This can be due to:

Therefore, one should not expect a common ancestor to be the arithmetic mean (supposing it means something) of the current species. And one should not expect that two closely related species on the tree of life should necessarily be more genetically similar to each other than any of the two to a third species.

Note that the phylogeny is constructed mostly based on genetic data. Which makes that two closely related species (on our tree which is not necessary the absolute tree of life) are (almost) necessarily more genetically similar (it is kind of a definition then).

You have an excellent answer from Remi.b already but I just wanted to add/emphasise this (because there is always more than one way of explaining something and IMO the site benefits from having many answers to the questions)...

The tree we construct does not necessarily accurately reflect what happened in evolution. If B & C evolved from A, and D & E came from B, we would create this tree if we measured using the correct indicator. But the methods we have are not perfect. The first evolutionary trees were based on morphological descriptions etc. and clearly some of the classifications were going to be wrong. These days we use molecular methods, which are probably more accurate but could also be wrong some times. For example if we based our phylogeny on one SNP variant we could have some idea about the phylogeny between a few species, but if we based it on millions of SNPs we would have a much better idea - as technology & models improve that is becoming more realistic. The key point here being there is a difference between the trees we can draw from evidence, and the real evolutionary tree.

If, for example, D evolved from B but was more genetically similar to C it could be due to convergent evolution (if the same mutations are selected for in C and D but neutrally or negatively in B). This is because, if there is a shared standing genetic variation at the point of speciation or the same mutations occur after speciation, and then C & D are imposed under similar selection and B is not, the allele favored in that environment will spread in C & D but not B (it may drift in B).

Imagine this with humans, where populations split off around the globe. Two populations spread from Africa (A) in to Southern Europe (SE) and Western Asia (WA). Population WA then derived two more populations - Central Asian (CA) and Eastern European (EE). If the Eastern European population developed a habit for drinking cow milk, and that information passed to the Southern Europeans, then selection would favor the ability to digest lactose in those two populations. If we then used the lactase persistence SNP (which had standing genetic variation at the time of divergence) to derive a phylogeny the populations SE and EE would appear related because the allele for lactase persistence is common, but in A WA & CA it would be rare (neutrally evolved). In this case the phylogeny we construct would be different to the true phylogenetic tree.

Basically if there is genetic variation at the point of divergence, or convergent selection, or any gene flow occurs after divergence it makes assessing the phylogeny more difficult and prone to error.

2
Are there genetic similarity between humans and pigs that don't exist in chimps?

1
Genetically speaking, are dogs exactly similar to humans and chimps both?
2
Are there genetic similarity between humans and pigs that don't exist in chimps?
0
Evolution of insects, spiders and jellyfish
4
What is the difference between a species tree, a gene tree and a phylogenetic tree?
1
Endogenous retroviral insertions as evidence for evolutionary relationships among primates
16
Do all living humans literally descend from one ape?
2
Cross-species infections
6
Were there any vertebrates with 6 or more limbs?