How are T cells transported?

T cells are formed in bone marrow and mature in Thymus. How are they transported from bone marrow to thymus ? Through the lymph vessels ?

The progenitor cells of T-cells (they do not develop into T-cells and show their characteristics before reaching the thymus) are mobilized into the bloodstream and enter the thymus from it by crossing the endothelial barrier. The figure shows schematically the development of the precursor cells from hematopoietic stem cells (HSC) and the migration of the precursor cells (it is from the paper linked below): 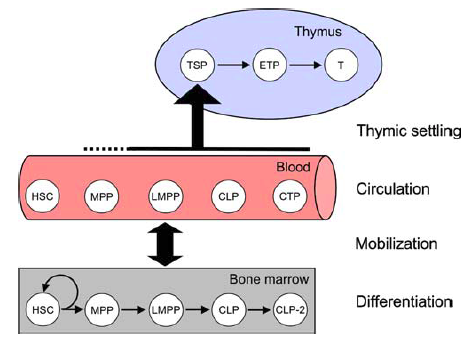 See this review for the details (if you have problems accessing the article, let me know):

prothymocytes are attracted to the thymus from the Bone Marrow by a chemotaxis , thymotaxin, a factor from thymic epithelial cells. then it enters into the thymic cortex where Thy-1 and terminal deoxynucleotidyl transferase (TdT) is expressed. During TCR gene rearrangement, TdT increases TCR diversity by inserting nucleotides at the D and J junction sites. IL-2 and IL-2R are expressed leading to autocrine proliferation of T cells. now the pre-T cell rearranges TCR genes (gamma/delta, alpha/beta). At this stage the pre-T cells are CD3+CD4-CD8- or "double-negative" cells. Double-negative cells that productively rearrange gamma and delta chain gene segments develop into CD3+CD4-CD8- gamma/delta T cells that are exported to the periphery in small numbers. Successful rearrangement of a set of TCR genes suppresses further rearrangement of TCR genes on the sister chromatid , thus each cell only expresses TCR with a single specificity. The majority of double-negative cells will go on to rearrange alpha and beta chain gene segments. The beta chain genes are rearranged and expressed first with a pre-T alpha chain to form the pre-TCR . Once the pre-TCR recognizes some intrathymic ligand , a signal is transmitted through CD3 which: halts further beta chain gene rearrangement (allelic exclusion)enhances alpha chain gene rearrangement causes CD4 and CD8 to be expressed The alpha beta T cells now become CD4+CD8+ or "double-positive" cells. T cells which fail to productively rearrange TCR genes die by apoptosis.

At this point the T cells are in the deep cortex which contains epithelial cells expressing both class I and class II MHC molecules. T cells with alpha beta TCR which are capable of binding self-MHC on epithelial cells continue to proliferate and differentiate into CD4+CD8- or CD4-CD8+ T cells. Nonreactive (not self-MHC restricted) T cells die by apoptosis. Thus, T cells are positively selected for self-MHC restriction in the thymus.

3
What cell types produce immunoglobins and where are those cells found?
3
Does an organism have only certain antibodies for life?
2
What goes wrong in the immune system that leads to autoimmune diseases
0
Do B/T cells form from lymphoid tissue or bone marrow?
3
How do memory cells(B-cells) encounter pathogens?