I read in Bruce Alberts Molecular Biology of The Cell :

....If,however,cells from one strain of mouse are introduced into a neonatal mouse of another strain , some of these cells survive for most of the recipient animal's life, and the recipient will now accept a graft from the original donor, even though it rejects "third party" grafts.

As far as I understand , in this experiment,they got these results because thymus hadn't yet learned what was "own" and what was "foreign".

Is the reason for why maternal microchimerism does not invoke immune response related to the above experiment ? Can we apply the same logic here ?

You are on the right track. This is an example of microchimerism (the maternal part is a bit off), and the key issue at hand is central tolerance.

A good definition of microchimerism is:

Microchimerism is existence of an allogeneic DNA in a living creature. (1)

Scientist do this on purpose for all kinds of reasons, but mostly to ether is study the immune system directly or to get a near-transgenic model. It should be noted that this isn't perfect, and that when you try to do this, you often can lead to auto-immune problems and often death of the mouse (30-50% survival in early work). If you go back to one of (if not the) pioneers of immunology, Peter Medawar, you can see when how this was done:

Mice and chickens never develop, or develop to only a limited degree, the power to react immunologically against foreign homologous tissue cells with which they have been inoculated in fetal life. Animals so treated are tolerant not only of the foreign cells of the original inoculum, but also of skin grafts freshly transplanted in adult life from the original donor or from a donor of the same antigenic constitution. (2)

If you would prefer a visual layout of the experiment, Starlz put together one in his review of transplantation (Pubmed): 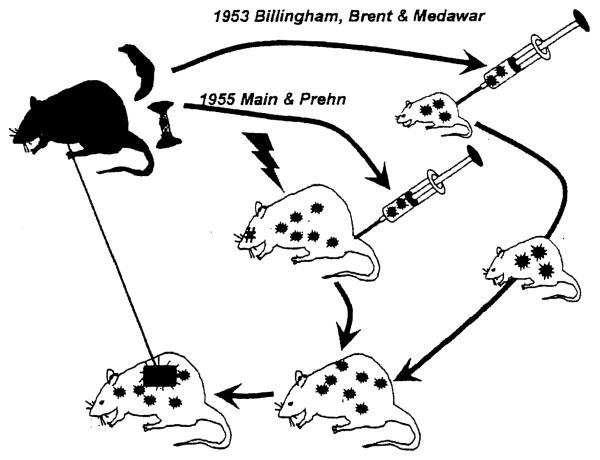 After looking over the section you quoted from Alberts, I'm pretty sure he was in fact referring back to these early experiments. But that was all the way back in the 1950's, what have we learned as the mechanism in 60 years?

The truth is that we don't have an absolute grasp on how this works when it doesn't cause an autoimmune problem and abort the fetus or even neonate pup. It's import to note that it probably does cause auto-immune problems and various other side effects (like sex differentiation) in mammals.

But when and how it is tolerated is likely mediated by central tolerance, and the ability to get the foreign MHC molecules tolerated by early lymphocytes. Essentially, the cells have to get incorporated into the AIRE machinery at an early enough stage that the T-cells are selected against the foreign cells.

There is enough biology here that an in-depth answer could be a dissertation, so I only want to touch on a few more points. You should note that this was done with relatively genetically similar animals, and most modern researchers use cells modified from genetically pure mouse breeds. We also know a lot more on how the cells "recognize self" and the HLA types of the population.

You are most likely to succeed when the MHC molecules are very similar (ie from a direct family member). This happens when the host and foreign cells have an HLA type match.

The lymphocytes, mostly T-cells in this case, of fetal mammals seem to be able to look at very similar MHC molecule on a foreign cell and decide "eh.. close enough," and build negative selection (part of β-selection) against lymphocytes that would kill the foreign cells. This requires that the cell be in the right place at the right time, and of course, be "close enough."

Do let me know if something is not clear or needs to be expanded upon. As someone who works in Immunology, I have difficulty determining where the detail line should be.

4
Plasma cells and memory cells
4
Antigenic and non antigenic
1
Does atrophy of the thymus not effect T-cell selection and tolerance?
1
Vaccination and Immunisation
2
Phagocytosis and bacteria
5
Do IgM and IgG differ for different infections?
1
Maternal immunity without prenatal vaccination?
2
B cell clones and affinity maturation