How is color information transmitted from the eye to the brain?

Is color information sent from the eye to the brain frequency-modulated, or are different colors transmitted by different axons?

Can one ganglion cell transmit different signals to the brain?

How does the brain know which color the light has, if signals of different receptors are mixed in the ganglion?

Short answer
Color vision is mediated by spike rate modulation (frequency modulation if you like), as well as ganglion-cell specific stimulation.

Background
Ganglion cells exist that transmit opponent colors. The color opponency model predicts that we cannot perceive a greenish-red or yellowish blue, which is quite right. We can, however, see mixtures of the two channels, such as red and yellow (orange), and red and blue (purple).

Then opponent model predicts the existence of ganglion cells that are sensitive to red/green opponency and blue/yellow opponency (in trichromats like humans): 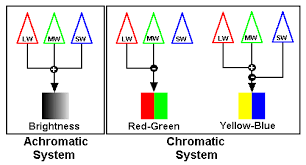 Indeed, it has been shown that these ganglion cells exist, i.e. cells that increase their firing in response to short-wavelength-sensitive (S+) and decrease their firing to middle-wavelength-sensitive (M-) and vice versa (Yin et al., 2009). Hence, it is not so that the frequency of light is represented in firing rate per se, but the frequencies of light are translated in spike rates, because spike rate is the only means in which neurons can transmit graded responses. In other words, every type of graded information is translated into spike rate eventually, including pressure differences, acoustic loudness etc.

Hence, as ganglion cells are sensitive to opponent pairs of colors, they do respond to particular colors. However, a "purple ganglion cell" does not exist, it is the combination of red and blue activations that lets us see colors due to synthetic processes in higher neural centers.

One ganglion cell can send different signals to the brain as it is basically an analogue converter of the red/green and yellow/blue opponent colors.

These inputs are sent to the thalamus (lateral geniculate nucleus) and higher visual cortices, where color-selective cells pick up the signals and integrate them for further processing. Here color mixtures are made to present the full gamut of colors as we know it: 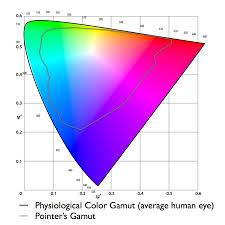 Not the answer you're looking for? Browse other questions tagged human-biology neuroscience vision neurophysiology or ask your own question.

3
What is the connectivity between on-center & off-center bipolar cells?
4
Why do we see a different color when we mix two colors?
4
Where in the nervous system are synapses chemical, and where are they electrical?
9
How do our eyes detect light at different frequencies?
2
What are the response frequencies of sensory neurons?
2
Seeing new colours with new photoreceptors
4
How do you check how many cones you have in your eye?
2
What is the signal conversion from hair cells to cochlear nerve cells?
2
Are sensory mechanoreceptors and mechanical nociceptors the same type of neurons or are they different?