How do white Caladiums perform enough photosynthesis to support their mass?

In some white caladiums, there is less than a square inch of green space spread over the whole leaf. How do these plants perform the photosynthesis necessary to support the large leaves, the roots, the flowers, and build a corm? 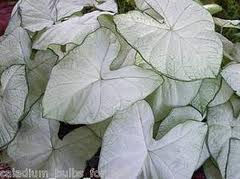 There are many different kinds of plants that have independently evolved this sort of variegation (non-green areas) in the leaves. However, the mechanisms by which they effect this vary between species.

Some have little or no chlorophyll in the non-green areas, but many others have changed the architecture of their leaf cell layers in the non-green areas, creating refraction effects that make the leaves appear white, but don't significantly change their photosynthetic efficiency (Sheue et al.) In fact, Arum italicum white areas actually have higher efficiency in certain light conditions! (La Rocca et al.)

I can't find any information on which type of variegation Caladium shows. The genus Caladium is related to the Arum I mentioned above which uses the "architecture" method, but it's also related to Epipremnum, which seems to use the "no-cholorophyl" method.

Sheue et al. mention that with some species that use the architecture method, using transmitted light instead of reflected light reveals that the white spots are actually green; while in no-chlorophyll plants the spots remain white. If you have a Caladium around, you could try holding its leaf up to a bright light, and see!

Any free growing (non parasitic) plant will rely on photosynthesis.

Plants do not have to be green though. It says in this article that the white caladium has chlorophyll, but relatively little, or the white color may come from other pigments that reflect other kinds of light.

“As with other white caladiums, there’s a little bit of mystery surrounding Florida Moonlight,” Miranda said. “Where’s the chlorophyll? Chlorophyll is a pigment that caladiums and other plants use to produce food by photosynthesis, and it gives the leaves their green color. White caladiums either get along with very little chlorophyll, or they somehow conceal its presence

Not the answer you're looking for? Browse other questions tagged plant-physiology photosynthesis botany or ask your own question.

6
Do plants with non-green leaves have chlorophyll and photosynthesis?
8
Why do plants' leaves become enlarged in low light areas?

20
How does a plant grow before photosynthesis is possible?
11
Why aren't plants' roots as diverse as leaves?
2
Do any plants grow leaves beneath the ground?
6
Can plant fruit and seeds be albino like animals?
13
What tree is this?
3
Why do plants need oxygen through their roots?
5
What is this plant, and is it edible?
6
Why aren't leaves black?
3
Unknown Lamiaceae plant identification
1
Where does the carbon in new spring leaves of a deciduous tree come from?