In this video on electro tonic potential, the tutor says that when the potassium channels open the potential drops from +40mV to -80mV, where the sodium channels have already closed at +40mV.

Now in that case, wouldn't the sodium channels that usually open at -55mV open up again when the potential is on its way reaching -80mV from +40mV, thereby making changes in all the potential differences that are occurring normally(according to the video)?

Thanks for the help.

The key to understanding this is to digest the fact that there are two gates blocking a normal sodium channel. These gates are called the activation gate (on the extracellular side) and the inactivation gate on the intracellular side. Both of these together, or any one of these alone, if closed, can block the sodium current from entering the cell.

I hope I answered your questions. Here are further links to understand this in greater detail. 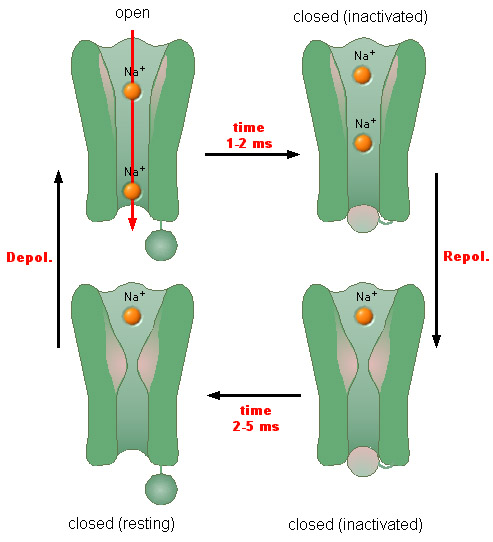 A more technical and biophysically accurate version of the diagram.

Not the answer you're looking for? Browse other questions tagged neuroscience neurology action-potential or ask your own question.

2
What is the mechanism responsible for the 'delay' in delayed rectifier potassium channels?
6
How does a change in the potential across a neuron's membrane get turned into a signal that is sent down the axon?
7
Why does the membrane of a neuron not stay at its depolarized state?
11
Why are potassium channels slower than sodium channels?
11
At what point during an action potential are the sodium potassium pumps working?
0
Functional role of voltage-gated potassium channels
1
why do sodium channels close with excessive extracellular potassium ions in cardiac myocytes?
0
How do firing patterns arise from the activity of many ion channels?
2
Why is the resting membrane potential of excitable tissue not affected by the extracellular sodium concentration?
1
Why don't sodium Voltage Gated Channels open during Repolarization?