Are these bat social calls? [duplicate]

Ask Question
Asked 7 years, 8 months ago
Active 4 years, 6 months ago
Viewed 210 times
1
$\begingroup$
This question already has an answer here:
Does this recording sound like the pulses emitted by bats? (1 answer)
Closed 4 years ago.

I'm currently researching bat social calls (not echolocation calls) and have been given a series of samples (in .wav format) and wanted to know if what I can hear is actually the social calls. Below is a Graph representation of the a sample from the data I have: 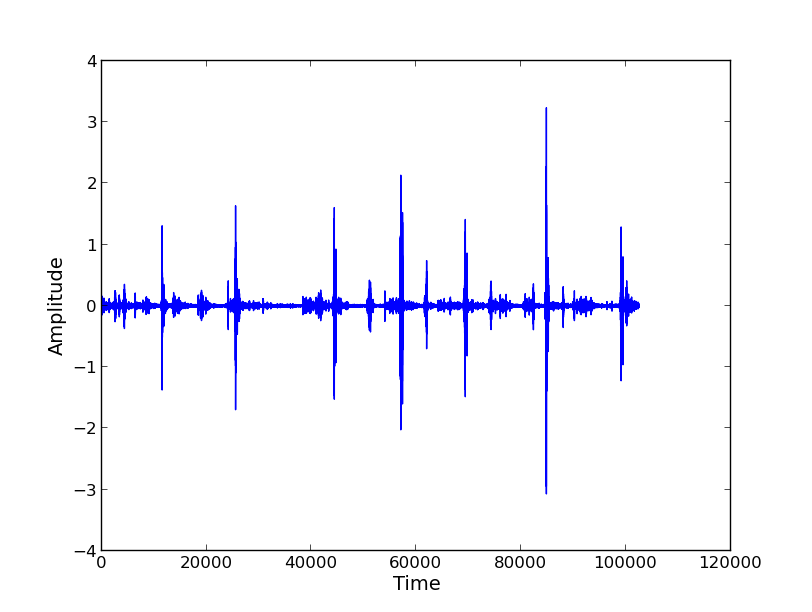 This looks fine to me. From this, I can clearly tell where the social calls are. If I play at the specific peaks, then it sounds like a bat "chirping." However, I've been told that social calls cannot be played back, and, therefore humans cannot hear them. I'm just trying to figure out what these noises, or, chirps might actually be.

Here is a link to the .wav file:

Thanks for your help :)

You recorded bats. You are interested in social calls. Socials calls can be recorded by your microphone but they cannot be read by standard media player because...

You might use some program like Adobe Audition in order to easily visualize the frequencies (vs time) of your record. (It might also help you finding all harmonics or performing Fourrier analysis)

This is a wide subject and there is still a lot to be discovered about bat social communication and how they use social calls in roosts and when flying. Generally a bat social call is not tonal, in other words it does not consist of a musical type note. Some bat detectors do not produce an accurate recording of a bat social call. Typically bat social calls use a lower frequency range than echolocation calls, and can thus be heard further away. Sometimes a bat will make a social call while echolocating which can cause confusion.

Not the answer you're looking for? Browse other questions tagged zoology ecology bioacoustics or ask your own question.

35
Does this recording sound like the pulses emitted by bats?

5
Are these cats calico?
9
Why are lions the only social cats?
4
Do Asian koel males communicate through calls?
16
Why are these trees leaning, but no trees around them are?
5
Whose horns are these?
2
What are the animals in these pictures?
2
What about this bat?
2
Are these springtails and isopods?