Could someone help me out with a basic example of the interactions of 2 or more non-identical alleles leading to an advantageous outcome for an individual organism? Based on empirical research OR on a theoretical model.

An example of 2 or more non-identical alleles cooperating across replication iterations/generations between individual organisms would be even beter. I somehow find this more spectacular :)

Please let me know if I'm not mentioning enough elements to answer the question. It's a very broad question and I accept very broad answers - semantically and across scientific branches.

Personal background: I am new to the scientific field of biology. I think I caught up on some of the basic principles of genetics, allellomorphs, loci and DNA replication and I've gotten interested in the workings of alleles.

Reading your updated question, I think you are interested about epistasis. Let me know if I am mistaken.

The concept of epistasis might be confused with the one of pleyotropy, so I will define both terms.

Pleyotropy occurs when one gene influences multiple phenotypic traits. Note: the phenotype, to make it simply is what a living things look like (its cells, proteins, shape of the face, size of the leaves, etc…). It is often thought in duality with the genotype which is the total genetic information contained in an individual that codes for the phenotype (Be careful, the environment is also an important factor influencing the phenotype, if you make sports you will have big muscles!)

Epistasis is when the effect on the phenotype of one gene depends on the presence of several (or only one) other genes. Wikipedia gives this (simplistic) example: 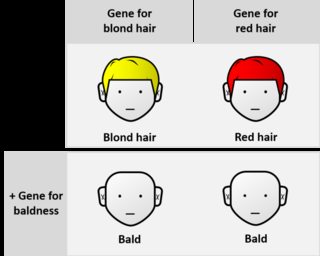 Here, two bi-allelic genes are involved. One gene that determines the hair color. The two alleles influence the phenotype such: one allele gives red hair and the other allele gives blond hair. Now There's another bi-allelic gene coding for baldness. One allele causes the bearer to be hairy and the other one causes the bearer to be bald. Therefore, if an individual carries the allele "Bald" in the "Baldness" loci, what this individual carries on the other loci is not important because it will result into the same phenotype anyway, he is bald. Now if in the baldness loci, the allele is "Hairy", then the expression of the other gene "Hair color" matters and therefore if the allele is "blond", the bearer has blond hair and if the allele is "red" the bearer has red hair.

The "Baldness" gene is called a modifier. One can also say that the expression the "Hair color" gene depends on the genetic background of the individual.

Now cases of epistasis are not always that easy and if they influence the fitness, this kind of epistatic interaction might have implications for their evolution.

Not the answer you're looking for? Browse other questions tagged genetics dna rna allele or ask your own question.

2
What are the methods for infering genetic interactions?
1
Why is it $q^2$ for the individual count in hardy weinberg?
1
Is genetic purging based on random shuffling of the genes of an individual or is it more intentional way of removing deleterious recessive alleles?
0
What is mean by the term “an organism's genotype is its specific combination of alleles for a given gene”?
0
Is there any way to tell if a gene is functional for an individual with only a reference sequence and the individual's sequence of the gene?
2
Is DNA from more parents (than two) better for the fitness of the offspring?
0
Are the alleles that code for the same phenotype all the same exact sequence?