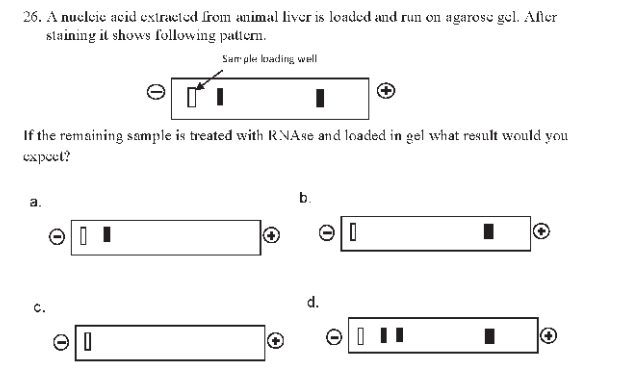 I do not understand how to solve this question. I know that RNAse will cut smaller pieces of RNA.

The answer given is A

The question is a bit vague in some important parts, so I'll have to make a few assumptions about what the authors likely meant.

RNAses are enzymes that degrade RNA. There are a few different ones that lead to different kinds of degradation. The type that you would use in an experiment like this is an RNAse that completely degrades RNA. The purpose of this is to be able to distinguish RNA from DNA. So whatever is left after the RNAse treatment is DNA, and the bands that vanished are RNA.

RNA can fold and will therefore migrate faster than DNA. So it shows up as the band which is towards the positive front. After RNAse treatment you'll lose that band. So the answer is A

Not the answer you're looking for? Browse other questions tagged dna homework rna gel-electrophoresis or ask your own question.

3
Separating DNA Fragments by Gel Electrophoresis. Are all the strands for one size the same?
5
Does bleach destroy RNAse activity, and if so, how does it do it?
1
Gel electrophoresis question
3
Remove RNAse from pipettes?
0
Alternative protocol for evaluating RNA integrity, using a bleach gel
3
How can I purify RNA after gel electrophoresis to remove residual acrylamide?
2
Reading and Understanding profile bands in DNA Fingerprinting
4
Quantifying DNA in a band on gel electrophoresis