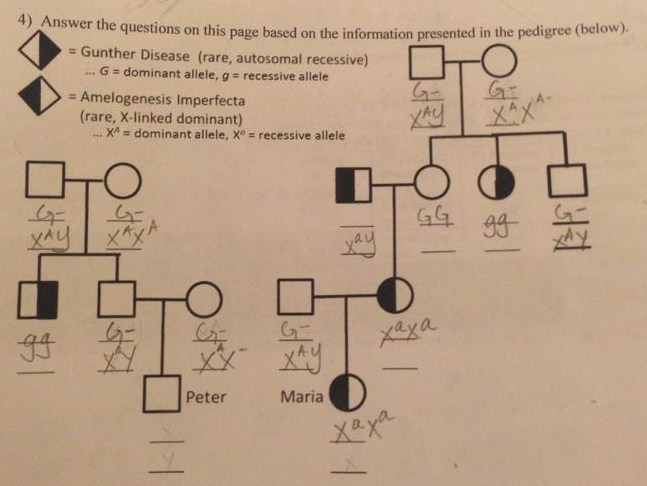 I am asked to fill the genotypes in the spaces provided but looks like I am aving a little bit of trouble. can anyone help? thanks in advance!

Talking about Maria's pedigree: Firstly, it seems as if you have mixed up with $X^a$ and $X^A$, see that the disorder is X-linked DOMINANT. Anyone with either heterozygous or homozygous dominant expression would have the disease expressed. So the first generation male should have a genotype: $X^aY$, because if it were $X^AY$ then Amelogenesis imperfecta would be expressed as his phenotype and the first generation female should have a homozygous recessive genotype. Also no child in the second generation would suffer from the same. (NOTE: The one suffering from Amelogenesis in the second generation would have genotype $X^AY$)

As for Gunther disease, both the parent in the first generation should have a heterozygous dominant expression and the offspring suffering must have a homozygous recessive expression. And you can apply the same basics in Peter's pedigree.

I think this much should be enough to complete the task, but if you still have some doubt you can put it forward in the comments.

Not the answer you're looking for? Browse other questions tagged homework molecular-genetics genetics or ask your own question.

3
Assessing probability from a pedigree
5
Explanation of the meaning of high-throughput
1
The drawing of genetic crosses
3
Can someone help me with this Pedigree Analysis?
2
What does (-;-) after a gene mean?
3
Is it possible to prove that a hand sanitizer can kill 100% of a person's germs?
1
Calculating Possible Combinations of Bases in a DNA Strand of a Given Length
2
Pedigree - Dealing With Unknown Parent Genotypes