Voltage-gated Potassium channels in the action potential of cardiomyocyte?

There is one type of potassium voltage-gated channels open in Phase 1 too. Some call them early repolarization channels.

I am not convinced that the channels are different in different phases: 0, 2, 3 and 4.

I think all these potassium channels are voltage-gated. However, they probably differ in some places. I am not sure if one type of channel can be open in all these five phases.

Which types of potassium channels are open during the action potential of cardiomyocyte?

Genesis of the Upstroke (Phase 0)

The action potential amplitude (the potential change during phase 0) is dependent on [Na+ ]o. The Na+ channels open very rapidly or activate (in about 0.1 msec), thereby resulting in an abrupt increase in gNa . However, once open, the Na+ channels inactivate (time course ˜1 to 2 msec), and gNa rapidly decreases.

In many cardiac cells that have a prominent plateau, phase 1 is an early, brief period of limited repolarization. This brief repolarization results in the notch between the end of the upstroke and the beginning of the plateau . Repolarization is brief because of activation of a transient outward current (ito ) carried mainly by K+ . Activation of K+ channels during phase 1 causes a brief efflux of K+ from the cell because the cell interior is positively charged and [K+ ]i greatly exceeds [K+ ]o . The cell is briefly and partially repolarized as a result of this transient efflux of K+ .The size of the phase 1 notch varies among cardiac cells.

Genesis of the Plateau (Phase 2)

During the action potential plateau, Ca++ enters myocardial cells through calcium channels During the flat portion of phase 2 , this influx of Ca++ is counterbalanced by the efflux of K+ . K+ exits through channels that conduct mainly the ito , iK , and iK1 currents. The ito current is responsible for phase 1, as described previously, but it is not completely inactivated until after phase 2 has expired. During the plateau (phase 2) of the action potential, the concentration gradient for K+ across the cell membrane is virtually the same as it is during phase 4. However, Vm is now positive. Therefore, there is a large gradient that favors efflux of K+ from the cell. If gK were the same during the plateau as it is during phase 4, efflux of K+ during phase2 would greatly exceed the influx of Ca++ , and a sustained plateau could not be achieved. However, as Vm approaches and then attains positive values near the peak of the action potential upstroke, gK suddenly decreases . The diminished K+ current associated with the reduction in gK prevents excessive loss of K+ from the cell during the plateau. This reduction in gK at both positive and low negative values of Vm is called inward rectification. Inward rectification is a characteristic of several K+ currents, including the iK1 current For these channels, large K+ currents flow at negative values of Vm (i.e., gK is large). However, when Vm is near 0 mV, or positive, as occurs during the plateau (phase 2), little or no K+ current flows (i.e., gK is low). Thus, the substantial gK that prevails during phase 4 of the cardiac action potential is largely due to the iK1 channels, but current through these channels is greatly diminished during the plateau. 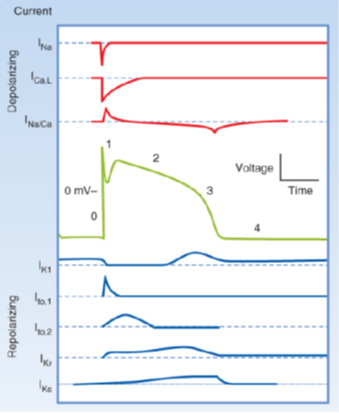 Other K+ channels play a role in phase 2 of the action potential. These are characterized as delayed rectifier (iK ) channels. These K+ channels are closed during phase 4 and are activated very slowly by the potentials that prevail toward the end of phase 0. Hence, activation of these channels tends to increase gK very gradually during phase 2. These channels play only a minor role during phase 2, but they contribute to the process of final repolarization (phase 3), as described later. Two types of iK channels exist, depending on their rates of activation. The more slowly activating channel is designated the iKs channel, whereas the more rapidly activating channel is designated the iKr channel . The duration of the action potential in myocytes in various regions of the ventricular myocardium is determined in part by the relative distributions of these iKr and iKs channels. Genesis of Final Repolarization (Phase 3)

The steady inward leak of Na+ that enters the cell rapidly during phase 0 and more slowly throughout the cardiac cycle would gradually depolarize the resting membrane voltage were it not for Na+ ,K+ -ATPase, which is located in the cell membrane. Similarly, most of the excess Ca++ ions that had entered the cell mainly during phase 2 are eliminated principally by a 3Na+ -1Ca++ antiporter, which exchanges 3 Na+ ions for 1 Ca++ ion. However, some of the Ca++ ions are eliminated by an ATP-driven Ca++ pump.

Not the answer you're looking for? Browse other questions tagged physiology cardiology or ask your own question.

7
Understanding Membrane / Resting Potential from the perspective of ions?
5
How do inward rectifier potassium channels work in the heart?
2
Is every neurotransmitter receptor an ion channel?
0
Are ligand gated channels saturable?
1
GHK Equation and Action potential