How do fish tolerate pH changes in water?

I want to know how aquatic animals behave as a natural indicator of the acidity in lakes and rivers.

How do they tolerate these pH change?

Often, in terms of a water body becoming acidified, it depends on the rate of acidification. Fish and other aquatic species, such as invertebrates, are fairly resilient to miniscule changes, but they also have a threshold at which not a lot of them, adapted or no, can survive.

Acid rain causes a cascade of effects that harm or kill individual fish, reduce fish population numbers, completely eliminate fish species from a waterbody, and decrease biodiversity. Low pH [...] is directly toxic to fish. In addition, low pH and increased aluminum levels cause chronic stress that may not kill individual fish, but leads to lower body weight and smaller size and makes fish less able to compete for food and habitat.

Some types of plants and animals are able to tolerate acidic waters. Others, however, are acid-sensitive and will be lost as the pH declines.

Commonly, benthic invertebrates (including insects, crustacean and molluscs) are used as indicators for ecosystem health. Invertebrates that need a high amount of calcium, such as crayfish (for their exoskeleton), are typically not found even in slightly acidified lakes. Other invertebrates can be used as indicator species because they respond to changes in water conditions, such as pH. 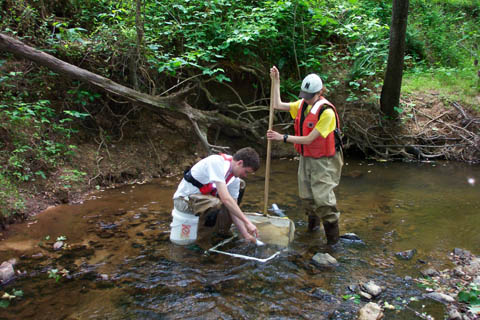 A good example of this is the acid rain that occurred in Sudbury, Ontario, Canada as a result of sulfur dioxide emissions from mining activities, which were especially high in the 1970s. This affected the lakes in the area not only from acid rain, but the runoff as well as there were no trees left. The pH was so low that it effectively made all lakes in the area sterile. Since then, a lot of effort has been put into bringing back the native aquatic species, such as liming the lakes and restocking them with species such as Brook Trout (Salvelinus fontinalis). More information can be found here:

Therefore, I do not know that aquatic animals necessarily behave a certain way as a natural indicator of acidity, however it is more of their presence or absence that biologists use to determine acidity and the overall ecosystem health in lakes and rivers.

Commonly, benthic invertebrates are used as indicators for ecosystem health. Invertebrates that need a high amount of calcium, such as crayfish are typically not found even in slightly acidified waters. Other invertebrates can be used for indicator species as they respond to changes in water conditions, such as pH.

Not the answer you're looking for? Browse other questions tagged ecology ichthyology biochemistry ph or ask your own question.

8
Can jellyfish improve the Black Sea ecosystem?
2
Excretion of various wastes and water requirement
2
Identifying internal structures of dissected fish
8
Why are there no tree-like plants that grow in lakes?
11
Does the cell internal temperature changes in response to a change in external temperature?
1
Any good fish books out there?