How many centrioles/basal bodies are there in multi-ciliated cells throughout the cell cycle?

There is a single basal body per cilium. During cell division the centrosome has two centrioles, however, during the differentiation of citiated cells, there is an amplification of basal bodies that nucleate from the centrioles.

In a work carried out by Al Jord et al (2014), the interplay of these two pathways had been studied in the brain ependymal cells. The study shows that post division, when the cell begins to differentiate, the daughter centriole serves as a site for creation of deuterosomes. During this stage deuterosome independent procentrioles also nucleate (the centriolar pathway) on both mother and daughter centrioles. However, the contribution to basal bodies is predominantly from the deuterosomes. 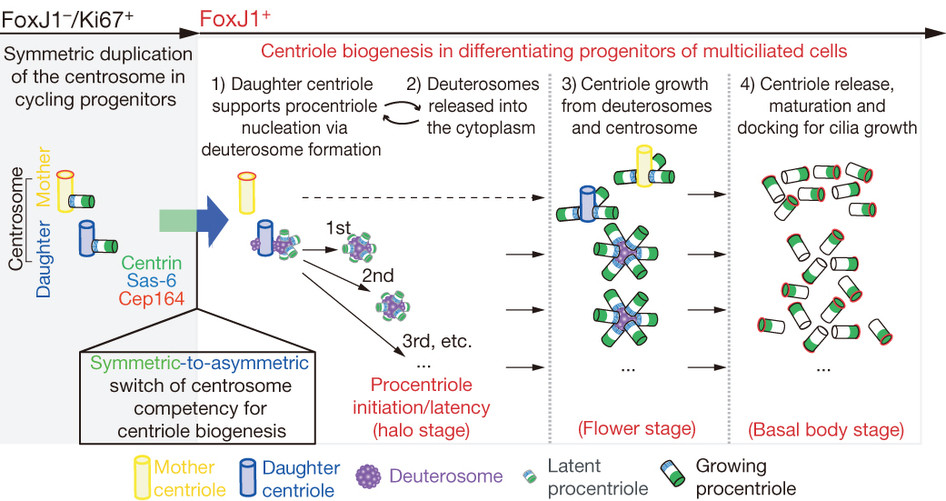 I am not really sure about multiciliated unicellular organisms. My guess is that they retain old basal bodies and new ones are created by a similar mechanism. Most ciliates can also undergo sexual reproduction.

It seems that there is one basal body per cilium in multiciliated cells. Centriole duplication (as far as I understand, a basal body is just a different name for a centriole that is attached to a cilium) is tightly coupled to the cell-cycle. There is always one pair of centrioles that are at the base of the primary cilium (of which there is exactly one in most cells).

But not in multiciliated cells. These cells are differentiated and can no longer divide, and their centriole duplication process is decoupled from the cell cycle. In fact, they aren't, strictly speaking, "duplicating", since many procentriolar bodies may form around one cylinder. Indeed, each cilium has its own basal body; thus a cell with hundreds of cilia has hundreds of basal bodies.

Not the answer you're looking for? Browse other questions tagged cell-biology cell-cycle cilia or ask your own question.

24
How many human cells are there in our body, on average?
4
How many cells are there in the apical meristematic tissue?
6
Are There Exceptions to Animal Cells not Having Cell Walls?
15
Contact Inhibition of Cell Division: Signaling Pathway
6
Why are there no Nissl bodies in the axon?
0
How does the cell cycle affect stem cell fate?
3
Are bacterial RNA polymerases distributed evenly throughout the cell or localized?