How do fungi react to being grown in a tissue culture?

I know how plant cells and animal cells react to being cultured and grown this way, but what about mushrooms? Would they respond like plants, and result in embryos growing off the mass? Or does the mass just grow indefinitely as in animals? Has anyone done this? How do they react when grown this way?

Generally, fungi are cultured on agar with a food source such as malt extract. One way to do this is to clone a mushroom from the fruitbody of a mushroom or from colonized substrate (e.g. rotting wood). Another approach is to germinate spores.

The fungus will grow as vegetative mycelia until it runs out of food. At that time, some species will grow tiny fruitbodies or sporulate before entering a more dormant phase, dying out. Unless refrigerated, standard agar plates dehydrate. Also, fungi may take on different textures: wispy, bumpy, root-like (rhizomorphic), leathery, powdery, and may darken or change color as they age.

Some cultures start to adapt their metabolism to the media after a large number of transfers (based on observation and discussed in Stamets' "The Mushroom Cultivator".) at this point, cultures may also start to grow more slowly.

The mycelia can be transferred from one plate to another or to another media (substrate) such as a log, 'fortified sawdust' (sawdust with ~30% w/w wheat bran), or pasteurized compost. With the appropriate nutrition and environmental stimuli (CO2 levels, temperature, moisture, light, etc), the mycelia will fruit, creating mushrooms - generally after fully colonizing the substrate.

Here is a figure of 35 agar plates with 16 different fungal cultures that I isolated from the wild (soil, wood, mushrooms, as described in Allison et. al, 2009; LeBauer, 2010), and have transferred from a mature culture (about a 2 months old) to a new plate, which are about two weeks old in this picture. Parent cultures are in the first and third row, with children below (they are genetic clones; instead of counting generations, I count number of transfers. 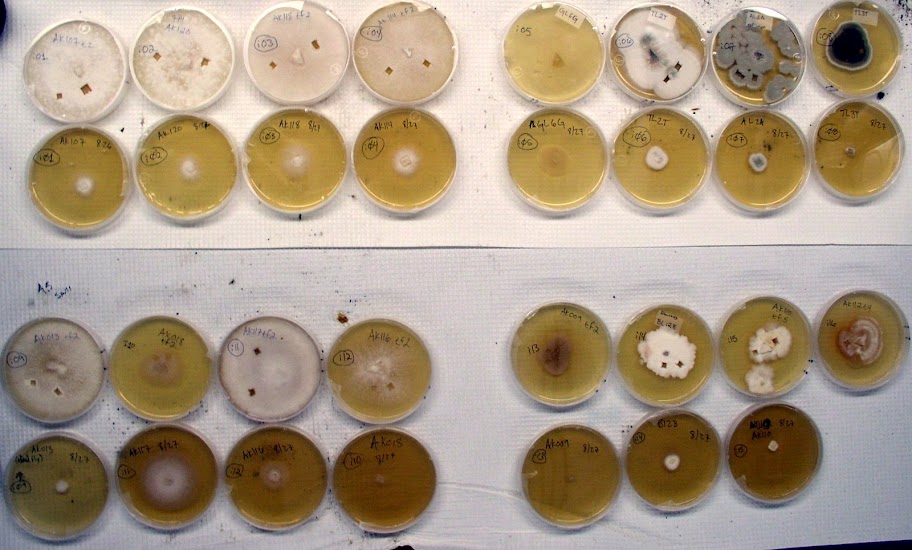 You can also find cultures of fungi (Yeast) in unfiltered beer.

I have used many techniques to isolate and culture fungi (Isikhuemhen and LeBauer, 2004; LeBauer, 2010) but I would recommend the books "The Mushroom Cultivator" and "Growing Gourmet and Medicinal Mushrooms" by Paul Stamets for more information on sterile culture techniques used in mushroom cultivation.

2
How do parasitic fungi sense optimal fruiting conditions from inside the host?
4
How does a fungus protect itself from digestion by other fungi?
5
How do mushrooms react to being grown in a microgravity environment?
0
How to calculate the quantification of qPCR to the equivalent of the number of nuclei in fungi?
4
What kind of mushroom is this in central Europe?