I have just begun to read about Chaos theory and have come across the statement that "Period three implies chaos."

My question: Does any odd period imply chaos or only 3? If so, how can populations of cicadas that cycle every 17 years exist?

The chaotic behaviour you are referring to (at least the one described in your link in the comments) is a property of the discrete version of the logistic equation, where you get chaotic dynamics at growth rates above ~3.55 (see the logistic map). The behaviour of this equation has been described in a classic paper by Robert May (1976). As you increase growth rate (a in your link) from one you go from a stable attractor (approached directly or by dampened occilations) to cycling behaviour (between 2 to 4 to 8 states as growth rate increase) to chaotic dynamics, which is shown in this bifurcation diagram. 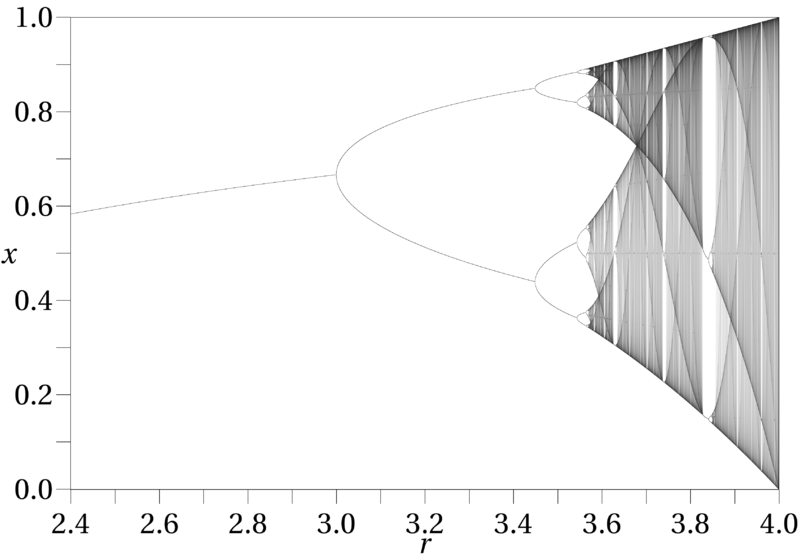 And to be clear, nothing of this has anything to do with period/cycle length per se (in the sense of species interactions or lagging feedback loops), but is a property of the model and the population growth rate. The statement about period 3 implying chaos probably refers to a brief window around r ~3.83 ($1+\sqrt{8})$ where you get cycling between three values, and at higher values then this you only find chaotic behaviour (which you get at lower values as well though).

Addition: I now realize that the statement "Period three implies chaos" comes from the theoretical paper with the same name (Li & Yorke, 1975). This paper proves that all one-dimensional models (not only the equation above) that has a period 3 cycle will also show chaotic behaviour. This proof is a special case of the Sharkovsky's theorem, which is older but was unknown to Li & Yorke at the time.

There is also a question at MathSE that deals with the same problem, and some of the answers there link to useful resourses:
https://math.stackexchange.com/questions/2901/period-of-3-implies-chaos

Not the answer you're looking for? Browse other questions tagged ecology mathematical-models population-dynamics theoretical-biology or ask your own question.

14
When are population dynamics models useful?
10
Genetic Diversity and Adaptation
16
Vaccination and population dynamics of an epidemic
26
What prevents predator overpopulation?
2
Effective population size when the population sizes varies from season to season
6
Premise of life cycle synchronization between predator and prey
7
What has caused life to choose this unfathomably tiny subset of all possible proteins?
0
Neanderthal and modern human population sizes
5
Where does this equation in the electrophysiology literature form come from?