Research projects with artificial life generally use creatures that are haploid. The offspring randomly inherit some genes from one parent, and some genes from the other parent.

Q1: Are there any biological species which reproduce similarly? I.e., they're haploid, but the offspring aren't clones. Perhaps hermaphroditic species like slugs or some plants?

Q2: Is there a name for this type of reproduction? If not, I guess I'll call it "pseudosexual" since it's a simplified form of true sexual reproduction.

Generally, all diploid species pass through a haploid phase in their life. This is called the alternation of generations and the cycle may be presented like this: 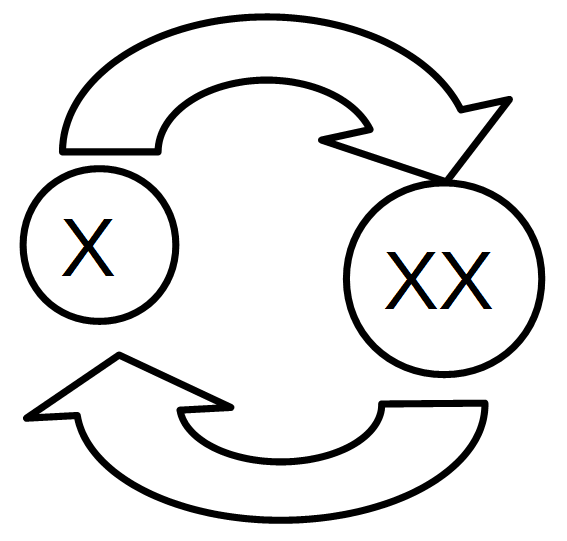 Commonly we see organisms that spend most of their life in the diploid phase, with greatly reduced haploid phase (e.g. humans "live" in haploid state only as gametes). However, this is not the only way possible. There are organisms, which spend similar amount of time in each phase, which change ploidy depending on the conditions of the environment and, of course, organisms which spend most of their lives as haploids, with only a short diploid stage.

As a rule, lower plants, fungi and protozoa may exibit this behaviour. Some examples:

Next question should be "why only lower plants and fungi?" And the shortest answer is that a diploid organism is usually more robust, it can survive more potentially lethal mutations than a haploid.

Not the answer you're looking for? Browse other questions tagged genetics sex or ask your own question.