Does a neuron ever generate an action potential without stimuli?

Most accounts I read involving action potentials and synapses and the like tend to focus mostly on the action potential as a mere automatic reaction to another similar event happening upstream.

From a more theoretical point of view, it would be nice to know if (and under what circumstances) a neuron would be able to generate an action potential, in the absence of an upstream neuron firing first.

I suspect that the nervous system, at least in higher animals, is not simply a relay system that processes and transmits information from senses to actuators like the limbs. The relay system picture is fine for short-timescale, reactionary behavior but it is hard to imagine any longer-timescale learning processes happening this way. This is what motivates my question.

Neurones fire when they're sufficiently depolarised past their threshold. In the sensory system this is in response to an external stimuli which sets of a chain reaction. Then motor neurones may relay signals back and in this case the signal or initial depolarisation is occurring in the brain. However this is still caused by a stimuli even if indirectly. If we take an action it is generally because we thought which action we should take because of some sort of stimuli e.g. we are cold so we put a coat on.

But anything which depolarises neurones can set of an action potential. However there's always something which causes it to depolarise, perhaps a drug or a stimulus or another neurone. If any of these don't count as a stimuli depending on your definition, there's your answer.

As for learning, where the structure of neurones can change so they connect to new neurones or not to old neurones or vary in the strength of their connection.

There are spontaneously firing neurons known as intrinsically oscillatory neurons, or simply pacemaker neurons. Under the right conditions these can fire action potentials in a rhythmic pattern without neuronal input. Examples are the thalamocortical relay neurons in the thalamus and inferior olive neurons. The basic mechanism is that a low-threshold Ca2+ current generates a small depolarization that in turn activates full-blown action potentials. In the recovery phase after the burst of action potentials, a hyperpolarization-activated cation current is activated (Ih), which in turn depolarizes the neuron. This depolarization then initiates another Ca2+ current and the oscillation continues. 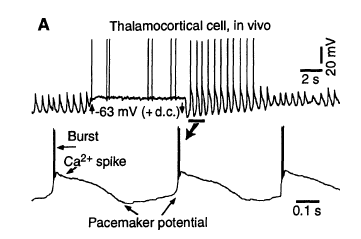 The thalamocortical oscillations are thought to be imprtant in the generation of the slow-wave EEG seen in the early phases of sleep, as well as during absence-epileptic seizures (petite mal).

14
How can action potentials be generated through thoughts?