Does the MS2 RNA binding protein have any translational repression effects?

I assume you are talking about the mTAG visualization technique for mRNAs (1). You are probably familiar with it, but the OFR of interest is tagged with MS2L sequence downstream of it and upstream of the 3'UTR. There is also a modified version, in which you can visualize both the mRNA of interest, and the protein that is translated, see the figure below (2). Haim and colleagues found that yeast expressing mCherry and MS2L tagged ATP2 grew on glycerol-containing media, which would require efficient translation of ATP2. 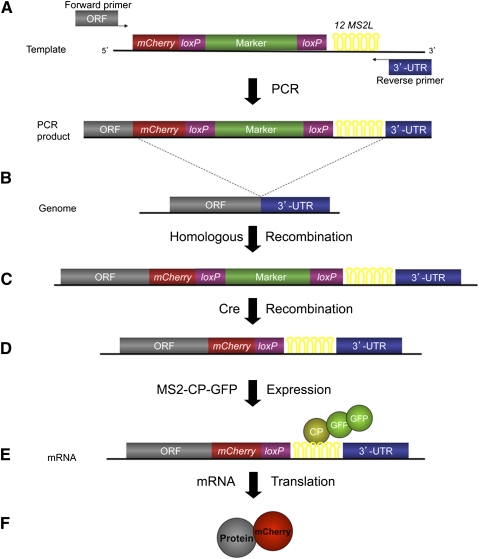 So I would assume that there is no translational repression if you tag the mRNA downstream of the ORF. Unless you have a very good reason to tag the ORF of interest with MS2 upstream of the start codon, I wouldn't do it, because these stem-loop structures would most probably stall translation, as mRNA secondary structure has been implicated in translation initiation efficiency.

Not the answer you're looking for? Browse other questions tagged molecular-biology translation or ask your own question.

15
How does translational coupling work in prokaryotes?
4
protein-binding sRNAs
5
In CRISPR bacteria, how does viral genomes get integrated into the spacers of CRISPR? Also, in its use, where does Cas9 cut the DNA?
2
Why does protein kinase C activated by different means have different effects?
8
How do we find antibiotics?
2
Why does 4-thiouracil labelling to map RNA-binding proteins cause a T-C change?
3
The shape of mRNA