What can be said on the length differences between interacting proteins? Are they usually of similar sequence lengths or not at all?

At least in a human protein interaction network, it appears that proteins indeed mostly bind to proteins of similar sequence length. Consider the figure below, based on analysis of a human protein interaction network from the Protein Interaction Network Analysis (PINA) platform. In the data set, the median relative protein size (the largest amino acid sequence length divided by the smallest in each interacting pair) was 1.9, the maximum value was 293.6 and the 99th percentile, which is the cutoff for the plot, was at 15.2. 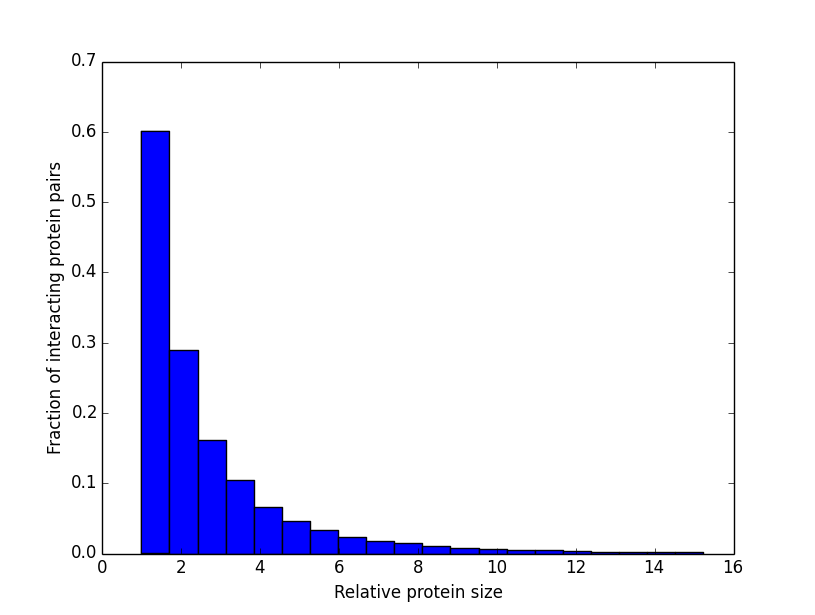 Edit: As per stords comment below, you get essentially the same result for a random network: 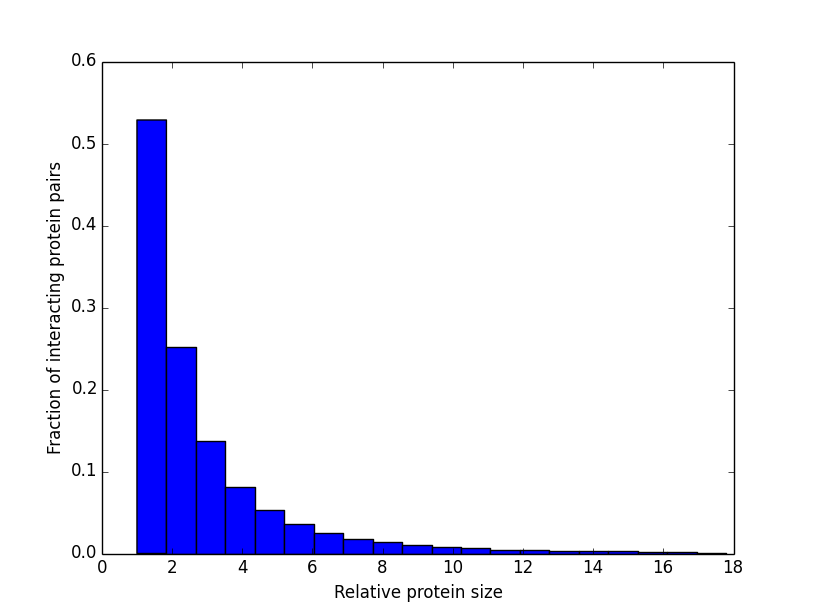 In this case, the network was generated by picking two proteins at random from the original network, creating an interaction between them, and repeating until the random network has the same number of interactions as the original.

Immediately, it might look like the PINA PIN is dominated by random interactions. I would run some network analysis to determine its characteristics, but seeing as it's a rather large network it would take more time than I have right now. The results are similar for two additional networks with interactions in Saccharomyces cerevisiae and Caenorhabditis elegans respectively downloaded from PINA. Note that all three networks have been constructed from databases with varying levels of curation (See the original publication for PINA: http://www.nature.com/nmeth/journal/v6/n1/full/nmeth.1282.html). As such, many of the interactions might not be biologically meaningful.

Taking into account the above, you might want to define "interacting proteins" more precisely. One might expect that a better curated network only containing interactions with a known function or effect might give a different picture. However, using a more strigently constructed human "functional interaction" network published by Wu et al. (http://genomebiology.com/content/11/5/R53, FIs_043009.txt in Additional file #3) still gave a similar result.

Method: I made a Python script to calculate the relative amino acid sequence lengths for all interactions in a human protein-protein interaction network (PIN) available from PINA ((http://cbg.garvan.unsw.edu.au/pina/interactome.stat.do). The network file is located at: http://cbg.garvan.unsw.edu.au/pina/download/Homo%20sapiens-20121210.sif. PINs for other organisms are also available at the same site and many other places. The script can be used with any PIN in SIF format using UniProt identifiers.

The script can be downloaded here: https://github.com/jarlemag/misc-bioinformatics/blob/master/ProteinInteractionNetwork.py

Keep in mind that the PIN data may not be entirely reliable.

10
What role does a protein's size have on protein-protein interactions?

2
Difference between Condensin and Cohesin proteins?
1
What are the differences between HPRD and BIOGRID databases?
8
Is consuming proteins different vs. consuming amino-acids and how?
2
How big is the change in proteins due to alternative splicing?
2
Cold adaptation in proteins, at sequence & structural level
3
Are all enzymes proteins?
9
Do chaperone proteins misfold?