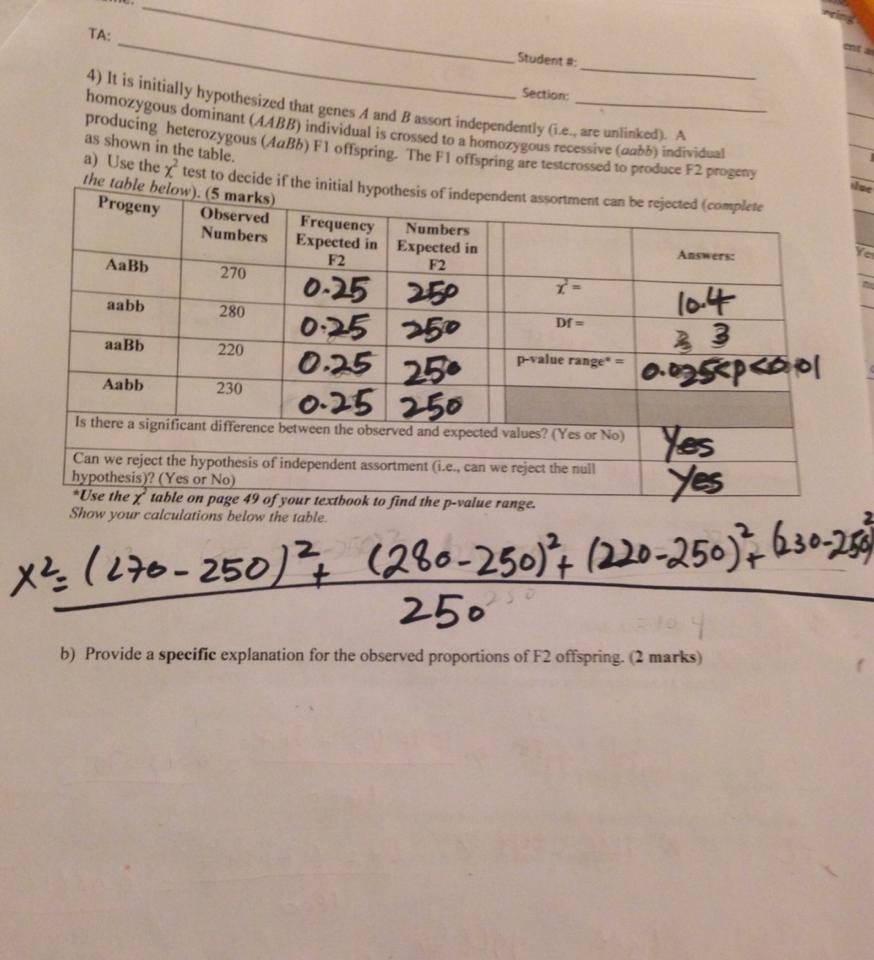 As indicated in this question, what do you think is is the best explanation for the observed progeny, is it because distance between genes affects recombination frequency? My main concern is question b).

Any help would be greatly appreciated thanks in advance!!

Until now, it looks good. When you are looking at basic mendelian gene linkage problems like these and you find out that the chi square analysis rejects your hypothesis, it means that there is linkage. In that case, you should have a case where your two recombinant genotypes have an approximately equal number of progeny and your two parental genotypes also have an approximately equal number of progeny. In your case, 220 is about 230, and 270 is about 280. 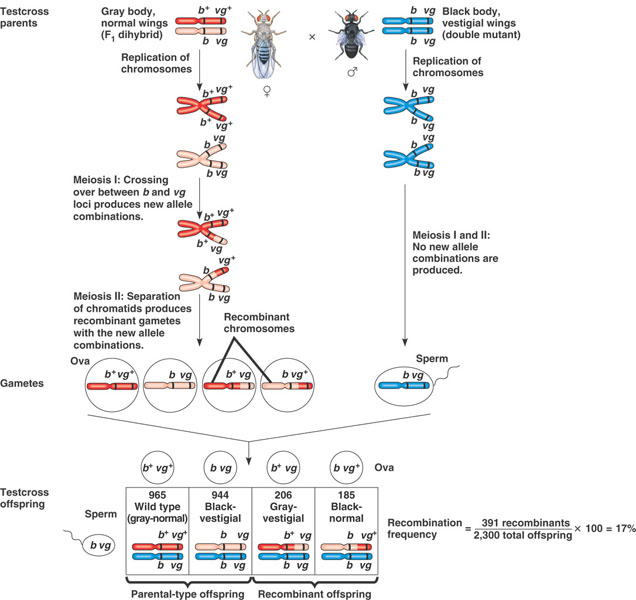 This image is just like your problem. I want you to imagine that b+ and b represent A and a in your problem and that vg+ and vg represent B and b in your problem, respectively. You start out with an AaBb crossed with an aabb. On the gametes line, it lists all of the possible gametes of this cross. On the line where it describes testcross offspring, we see a situation very similar to yours. In this case, AaBb = 965, aabb = 944, Aabb = 206, and aaBb = 185. We have our two pairs: AaBb/aabb and Aabb/aaBb. Sound familiar?

The recombinant offspring are defined as the offspring that do not have a genotype of either parents. The reason this is important is because you need a crossover to get a recombinant. The closer two alleles are together on the same chromosome, the harder it is to get one of the alleles to cross over without the other one crossing over with it.

Let's clarify. This means that if the alleles are closer, you get less crossovers. All recombinant exist because of a crossover. Therefore, the closer two alleles are, the less recombinants you get.

Quick note: the formula for the distance two alleles are from each other is expressed by this formula:

This is consistant with everything we have said, because as recombinant frequency decreases, distance apart decreases as well.

Another way to explain it: on the gametes, AB and ab really like to stay together, as they are LINKED. It is very difficult to separate them. That is why there are more AaBb and aabb; they only require the gametes AB and ab.

Apply the formula to find out how far they are apart. I think you can figure out the rest from here. I want you to try and answer the question.

Not the answer you're looking for? Browse other questions tagged homework gene-expression genetics allele or ask your own question.

2
Genetic Epistasis Question
1
what is the modern, molecular explanation of independent assortment of alleles?
1
Genes & Map Units
2
Can gene-gene interactions result in gene expression?
1
Genotypes of gametes produced by an F1 individual?
1
How deep underwater could you breathe using a tube which breaks the surface until the water pressure makes it impossible to inhale air?
0
What is the map unit between the genes?