Promoter in the lac operon

Here is the question:

Suppose an experimenter becomes proficient with a technique that allows her to move DNA sequences within a prokaryotic genome. If she moves the promoter for the lac operon to the region between the beta galactosidas gene and the permease gene which of the following would be likely?

Here is the answer:

Beta galactosidase will be produced.

My question to you is: why is this so? I have no idea where this conclusion came from. Thanks.

Since @biogirl has given an answer, I'll add my opinion:

β-galactosidase would be expressed but the permease and transacetylase would not.

Then, if an inducer was added it would relieve the effect of the transplanted operator and the downstream genes would be transcribed. It's even possible that this experiment has been done sometime in the last three decades.

The OP has now edited the question in such a way as to make my answer, and the answer from @biogirl, nonsensical. The original wording referred to moving "the lac operon" not "the lac promoter", hence my question in a comment asking "operon" or "operator"?

I'll leave my answer here, but this question is now so compromised that I advise everyone to just forget about it.

I believe the answer should be that permease is expressed. 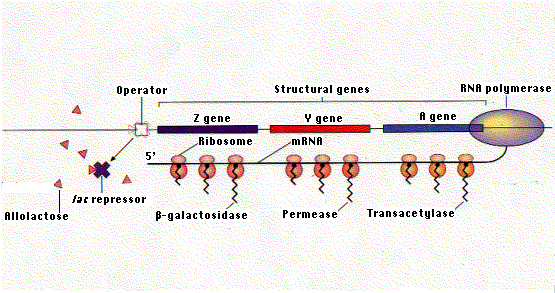 As you can see from the image, if the operator is moved between Z gene and Y gene, Y gene should be expressed and permease should be made.

Not the answer you're looking for? Browse other questions tagged homework gene-expression genetics gene-regulation or ask your own question.

5
T7 promoter leakiness
3
How might gene clusters like the lac operon evolve?
2
How can a continuous RNA be transcribed in the lac operon?
0
What is the significance of and biological mechanisms demonstrated in lac operon?
6
Lac operon: How can lactose enter the cell in the absence of lactose permease?
0
Are the subordinate genes of a repressed operon really “turned off”?
1
What does the phrase 'background level' mean?
0
Is the lac operon repressed in the presence of both glucose and lactose?