How do TLR1/TLR2 activate the MyD88 dependent pathway

Recently, I've been reading about the MyD88 dependent signalling pathway, with particular reference to its activation in Macrophages and other cells of the immune system on recognition of a pathogen. I understand that when a PAMP (Pathogen Associated Molecular Pattern) binds with a PRR (Pattern Recognition Receptor), the receptor undergoes a conformational change, which precipitates a cascade of chemical reactions between various proteins, which eventually leads (inter alia) to the translocation of NF-κB to the nucleus, which leads to the production of cytokines. My question is about the finer points, particularly with respect to TLR1 and TLR2.

My reading suggests that these generally form a heterodimer - is this always true? Are both required for a pathogen to be recognised and an immune response produced?

Upon the pathogen binding with TLR1 (whether in a complex with TLR2 or not) what precisely happens to the receptor. I understand that MyD88 is, ultimately, recruited, but by what means?

I'm still a little new to stackexchange so I apologise if this question is not up to standard, in which case, let the question simply be: 'How do TLR1/TLR2 activate the MyD88 dependent pathway?'

The TLR are usually working as homodimers (Toll-like receptors), although TLR2 can cooperate with TLR1 or 6. Upon binding of its ligand (this is called pathogen associated molecular pattern) the receptors change their conformation and allow binding of TIRAP (TIR adapter protein) to their Toll-interleukin 1 receptor (TIR) domain. TIRAP then recruits MYD88, which then recruits IRAK1 or 4. The signal is then passed down the pathway as shown in the figure below (taken from the Wikipedia article on TLR). 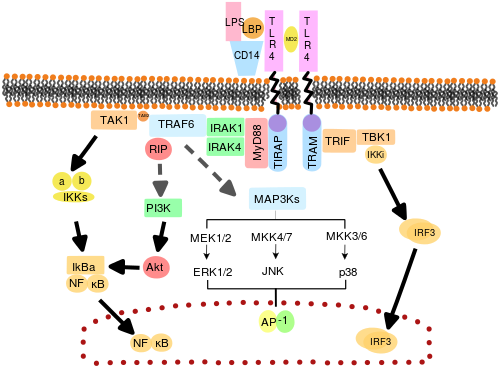 Not the answer you're looking for? Browse other questions tagged immunology signalling or ask your own question.

4
Is the complement system a part of innate or adaptive immunity
8
All UniprotIDs of a cancer pathway
2
What is the name of the property of viruses can activate a second time, with different symptoms?
0
Which cells release inflammatory mediators?
1
What is the advantage of having multiple pathways to activate complement?
2
Help in understanding a sentence about TCR-MHC interaction and immune synapse formation
2
Turning off the IP3 cascade