I've often heard that a population, human or otherwise, will continue to grow as long as there is food available (assuming nothing else is killing them off). It makes sense: if you have food you can live, and if nothing is hunting you you'll survive to reproduce.

I recently designed a piece of software to simulate an ecosystem, with groups of creatures of different species eating and hunting and reproducing alongside each other. It was very simplified (each animal had simple attack/defense/speed/stealth values, etc), but something became rapidly apparent: in every simulation the predators overwhelmed the prey, reproducing until their numbers could not be sustained by the herbivores, and leading to an inevitable die-off of both groups. I could delay the die-off by adjusting different values and initial population counts, but it would always happen eventually. The predators would eat and breed and eat and breed until the entire system collapsed.

At first I thought it was just the product of my over-simplified system, but it got me thinking: what prevents predators from overpopulating in real life?

It seems like the natural tendency would be for (for example) the sharks to continue breeding and eating until all the fish are gone, or the wolves to eat all the deer, etc. Obviously some predators have predators of their own, but that's just putting off the question: if the hyenas don't overpopulate because the lions eat them, then what's keeping the lions from overpopulating? I can't come up with anything that would prevent the apex predators from growing too numerous, then fighting each other over a dwindling prey population, then dying off entirely when there was no more food to find.

Do predator populations self-regulate to prevent putting undo stress on their prey populations? Or is there some other mechanism to keep the predator hierarchy from becoming top-heavy?

The short answer is, as @shigeta said

[predators] tend to starve to death as they are too many!

To have a better understanding of what @shigeta said, you'll be interested in understanding various model of prey-predator or of consumer-resource interactions. For example the famous Lotka-Volterra equations describe the population dynamics of two co-existing species where one is the prey and the other is a predator. Let's first define some variables…

You can show that for some parameters the matrix for these equations have a complex eigenvalue meaning that the long term behavior of this system is cyclic (periodic behavior). If you simulate such systems you'll see that the population sizes of the two species fluctuate like this: 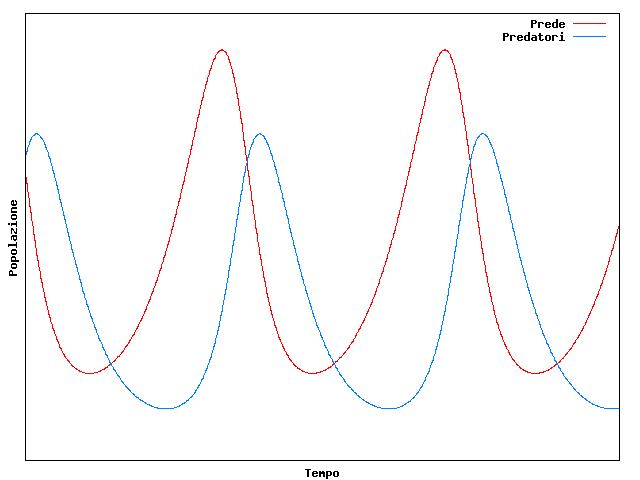 Representing the same data in phase space, meaning with the population size of the two species on axes $x$ and $y$ you get:

where the arrows shows the direction toward which the system moves. If the population size of the predators ($y$) reaches 0 (extinction), then $\frac{dx}{dt} = x(\alpha - \beta y)\space$ becomes $\frac{dx}{dt} = x\alpha \space$ (which general solution is $x_t = e^{\alpha t}x_0$) and therefore the populations of preys will grow exponentially. If the population size of preys ($x$) reaches 0 (extinction), then $\frac{dy}{dt} = -y(\gamma - \xi x)\space$ becomes $\frac{dy}{dt} = -y\gamma \space$, and therefore the population of predators will decrease exponentially.

Following this model, your question is actually: Why are the parameters $\alpha$, $\beta$, $\xi$ and $\gamma$ not "set" in a way that predators cause the extinction of preys (and therefore their own extinction)? One might equivalently ask the opposite question? Why don't preys evolve in order to escape predators so that the population of predators crushes?

As showed, you don't need a complex model to allow the co-existence of predators and preys. You could describe your model a bit more accurately in another post and ask why in your model the preys always get extinct. But there are tons of possibilities to render your model more realistic such as adding spatial heterogeneities (places to hide for example as suggested by @AudriusMeškauskas). One can also consider other trophic levels, stochastic effects, varying selection pressure through time (and other types of balancing selection), age, sex or health-specific mortality rate due to predation (e.g. predators may target preferentially young ones or diseased ones), several competing species, etc..

I would also like to talk about other things that might be of interest in your model (two of them need you to allow evolutionary processes in your model):

1) lineage selection: predators that eat too much end up disappearing because they caused their preys to get extinct. This hypothesis has nothing to do with some kind of auto-regulation for the good of species. Of course you'd need several species of predators and preys in your model. This kind of hypothesis are usually considered as very unlikely to have any explanatory power.

2) Life-dinner principle. While the wolf runs for its dinner, the rabbit runs for its life. Therefore, there is higher selection pressure on the rabbits which yield the rabbits to run in average slightly faster than wolves. This evolutionary process protects the rabbits from extinction.

Remi.b's answer is an excellent one, and this should be taken as a supplement to it:

It's possible your simulation is correct

The Lotka-Volterra equations are what is known as a deterministic model, and it describes the behavior of predator-prey systems (in a somewhat simplified fashion) in large populations. Small populations are subject to what is known as stochastic extinction - as the predator and prey curves approach their minimums, they may predict populations less than 1, which in reality are either 0 or 1, and when they're 0...well, someone's gone extinct.

In a similar model I've been working with, that's a pretty simple adaptation of a L-V model that should, deterministically, result in a stable system like in Remi.b's picture, the predators go extinct 20% of the time, and the prey 80% of the time.

One of the possible adjustments of these mathematical models is to introduce a "place to hide", making some (small) percent of the prey population not accessible (or much more difficult to access) for predators. After the number of predators decreases from starvation, prey individuals are relatively safer outside the "place to hide" and can grow over this limit before the number of predators increases again.

You need to add Bell curves to your simulation. The most important curve to simulate is the nutritional quality of the prey though there are plenty more thing to curve like speed and virility for prey and predators both. Nature uses lots of Bell curves so they must be good for something, such as softening the harsh effects of pure exponential growth. I suspect that the more Bell curves you implement the more stable your populations will become.

If the food value of your prey is all equal then there's no reason for your predators to not eat every last one. That's what I do with a plate full of foodstuffs, all equally delicious and with enough surplus that all the bad food can be thrown in the trash. Problems arise when you are forced to eat the trash because there's nothing else to eat.

An easy example is seen in the human vs plant food supply. Population should rise with no detriment as we produce more and more food, and it would if the quality could stay the same. The population does rise but because the nutritional quality keeps dropping, the detriment is rapidly increasing on numerous health and population charts.

This boils down to one main reason: competition.

Animals, in general, don’t like sharing resources with direct competitors, but this violence over food, territory, and in the case of intraspecific relations, breeding rights seems to be more extreme the higher up you go on the food chain.

An excellent example of this regards cougars. A dominant tom cat in Montana, for instance, rules over a domain that can easily exceed a hundred square miles. This territory is several times larger than what he’d require just to feed himself, so why is it so large? It’s quite simple: breeding rights. Within the borders of his, hundred or so square miles of territory are lands also used by two or three females and the cubs he’s fathered with them. Other tom cougars enter at their own risk, as he’d be more than happy to run them out or kill them. The same fate befalls any of his sons who reach maturity, so they either disperse to lands unknown or die trying. Dispersing males naturally die frequently in most species as a result.

Females also defend their territories, but since it’s not advantageous for them to have multiple potential breeding partners, their lands aren’t near as large (maybe forty square miles or smaller), just big enough to keep them and their offspring safe and well fed with all the deer, elk, coyotes, and/or bighorns they need, in addition to smaller prey. Female offspring who disperse have an easier time finding territories than their brothers and are less likely to disperse widely because of this fact.

To answer your question, predators self regulate their populations, often violently. In a stable ecosystem, there’s enough of them to keep their prey in check, but due to factors of real estate, breeding rights, and interactions with other predatory species, they simply don’t overpopulate.

What you are missing is that not all prey are equally easy to catch. The old, sick animals living in exposed places are much easier to catch than animals that are young, healthy and living in well-protected places. As the predator catches the easy meat, it becomes progressively harder and harder for the predator to get a meal.

If I missed seeing this in one of the other answers, I apologize, but I don't believe anyone has mentioned a very relevant fact about some predators that directly affects their populations at any given time. The fact is that wolves and probably other predators living in a pack-style grouping, allow only the alpha male and female to mate. This obviously severely limits the number of offspring born each year as well as leaving the pack vulnerable to catastrophe when something happens to either or both alphas. This mode of self-regulation is independent of food availability so works in years of abundance as well as famine.

Not the answer you're looking for? Browse other questions tagged ecology population-dynamics ecosystem antipredator-adaptation predation or ask your own question.

0
If wolves (or foxes) are fitter than rabbits, why rabbits have not become extinct?
27
Why haven't prey evolved the ability to always outrun their predators?
11
What was the first piece of work in computational biology?
10
Why are the fertility rates of large predators kept low?
5
Exponential growth equation and bacteria
4
Initial population when i count backwards?
3
Value of mathematical models in biology
5
Does an increased reproduction/mortality rate provide an evolutionary advantage?
4
References concerning the relative population sizes of predator and prey
4
Guide to learning about Population biology / ecology / dynamics for a non-Biologist
See more linked questions

6
Natural enemies boost deep evolutionary fitness?
6
Premise of life cycle synchronization between predator and prey
10
Why are the fertility rates of large predators kept low?
19
Was the recent "conservation hunt" of a black rhino supported by science?
4
How to introduce predators to a simulated ecosystem?
5
What is the biology behind human population dynamics?
4
References concerning the relative population sizes of predator and prey