How much does the distance between a transcription factor binding site and a promoter influence transcription?

Assume we have a synthetic construct with a minimal (inducible) promoter that requires activation for significant transcription to occur. Realistically, how important is the distance between an activator binding site and a promoter - would placing the binding site closer to the promoter lead to significantly stronger activation, or more robust system behavior?

In some genomics-related models I saw authors assigned weights to binding sites based on position (orientation and distance from the promoter); the general idea was that binding sites farther away could have a weaker influence on transcription. This can be modeled e.g. by decreasing the binding affinity. But that was genomics, and I'm unsure how much of that has any relevance in smaller scale plasmid constructs.

For example, suppose we have a highly specific binding site (e.g. a TALE binding site) upstream of the promoter: 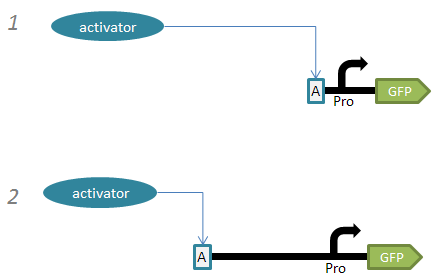 In Fig.1, the binding site A is only e.g. 40 bp away from the promoter. In Fig.2, it is e.g. 5000-7000 bp away. Should I expect this to make a noticeable difference? Would the same apply if it would be a constitutive promoter, with a repressor instead of an activator? What about more complex networks, could the answer change?

That really depends on your system. At least for yeast the difference influences the strength of the activation ("Analysis of Transcriptional Activation at a Distance in Saccharomyces cerevisiae").

For bacteria such long distance regulations have recently been identified. Before that it was thought that this does happen only in eukaryotes. See the paper: "Long distance relationships: enhancer-promoter communication and dynamic gene transcription."

I eukariotic cells the regulatory sequences (transcription factor binding sites and enhancers as well as silencers) can be really far away. An example for this would be the rs12913832 in intron 86 of HERC2, which influences the expression of the OCA2 gene, which is about 21 kB away. Both genes are not related in their functions. Normally three transcription factors interact here in the regulation of OCA2, HLTF, LEF1 and MITF, which leads to the formation of a DNA loop between the enhancer in HERC2 and the promoter in OCA2. The polymorphism reduces the binding of HLTF to the enhancer and hinders the formation of the loop which results in reduced expression of OCA2 (the whole story can be found here: "HERC2 rs12913832 modulates human pigmentation by attenuating chromatin-loop formation between a long-range enhancer and the OCA2 promoter.")

To go deeper into the topic, the following reviews are interesting to read: