How is a stem-cell induced to assimilate a knock-in DNA construct?

While looking at (daylight) color perception I came across a paper by Jeremy Nathans (et al., Proc. Nat. Acad. Sci., vol. 100 no. 20, 2003, full text here) in which he describes the creation of a mouse with genetically modified vision.

My threshold question is just about the mechanics of the process, which he characterizes as "site-directed mutagenesis." My understanding (a guess, really) is that embryonic stem cells are induced to assimilate homologous human DNA sequences and these cells are injected into mouse blastocysts.

In outline I understand the idea of the DNA construct but wonder physically how the stem cell initially acquires the knock-in construct.

Thanks for any enlightenment.

Edit: I see that there are several ways to do this and that the paper's "Materials and Methods" section focuses on the molecular genetic details. Maybe we can't get the information from the four corners of the document? If so I'd still be interested in whatever process seems likely given the sort of mouse they made. Thanks.

There are two ways to introduce genetic material past a cell membrane. Infection and generation of a porous cytoplasm. Viruses and bacteria generally are used. Retroviruses tend to cause leukemia so they are avoided however they are the only way to get past the nucleus in vivo of multicellular life. Electroporation and needles generate a porous cytoplasm allowing genetic material to seap or be inserted into the cell.

Once the genetic material is in the cell it has to have contained site specific oligonucleotides to hybridize with the strand of interest. 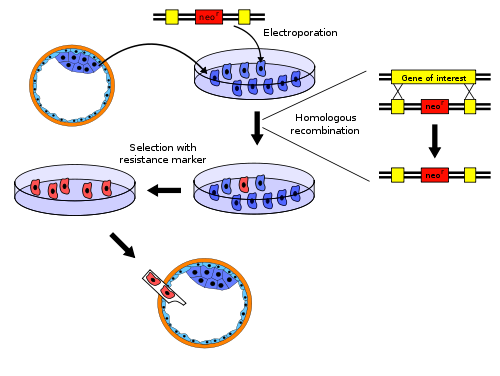 The procedure for making mixed-genotype blastocyst.

Breeding scheme for producing knockout mice. Blastocysts containing cells, that are both wildtype and knockout cells, are injected into the uterus of a foster mother. This produces offspring that are either wildtype and coloured the same colour as the blastocyst donor (grey) or chimera (mixed) and partially knocked out. The chimera mice are crossed with a normal wildtype mouse (grey). This produces offspring that are either white and heterozygous for the knocked out gene or grey and wildtype. White heterozygous mice can subsequently be crossed to produce mice that are homozygous for the knocked out gene. There are several variations to the procedure of producing knockout mice; the following is a typical example.

The gene to be knocked out is isolated from a mouse gene library. Then a new DNA sequence is engineered which is very similar to the original gene and its immediate neighbour sequence, except that it is changed sufficiently to make the gene inoperable. Usually, the new sequence is also given a marker gene, a gene that normal mice don't have and that confers resistance to a certain toxic agent or that produces an observable change (e.g. colour or fluorescence).

Stem cells are isolated from a mouse blastocyst (a very young embryo) and grown in vitro. For this example, we will take stem cells from a white mouse. The new sequence from step 1 is introduced into the stem cells from step 2 by electroporation. By the natural process of homologous recombination some of the electroporated stem cells will incorporate the new sequence with the knocked-out gene into their chromosomes in place of the original gene. The chances of a successful recombination event are relatively low, so the majority of altered cells will have the new sequence in only one of the two relevant chromosomes - they are said to be heterozygous. The stem cells that incorporated the knocked-out gene are isolated from the unaltered cells using the marker gene from step 1. For example, the unaltered cells can be killed using a toxic agent to which the altered cells are resistant.

When these heterozygous offspring are interbred, some of their offspring will inherit the knocked-out gene from both parents; they carry no functional copy of the original unaltered gene (i.e. they are homozygous for that allele). A detailed explanation of how knockout (KO) mice are created is located at the website of the Nobel Prize in Physiology or Medicine 2007.

Not the answer you're looking for? Browse other questions tagged molecular-genetics or ask your own question.

12
How does the stem-loop cause intrinsic transcription termination?
5
Cell cycle selection
1
Can you detect if a mutation is spontaneous or induced?
5
How to read this DNA inversion diagram?
1
How does gene editing in one cell affect other cells?
0
Why is my DNA below the ladder?
5
How does DNA codon (5`-3`) convert to mRNA?