Why is there a difference in the rotation of the tail fin in fish compared to marine mammals?

I've been thinking about this one, but I can't seem to find what causes this difference.

All fishes that I've seen have their tail fin positioned vertical: 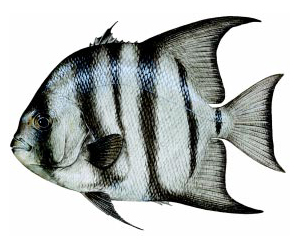 But all the marine mammals I know have their tail positioned horizontal:

Why is there this difference? Is it because it's mammals compared to fish? Or could fish as well have horizontal tail fins?

While fish tend to move from side to side (lateral undulation) for which a vertical tail makes sense, the land ancestors of marine mammals had their limbs under them and so their spines were already adapted to up and down movement (dorsoventral undulation). When these animals moved to marine environments, they continued up and down movement in their swimming, for which a horizontal tail makes sense.

(The wikipedia article on fins gives some more detail, and links to this webpage on Berkeley.edu. A paper by Thewissen et al. suggests that for cetaceans, dorsoventral undulation as a swimming strategy came first, and the horizontal tail evolved later.

In a third example beyond fishes and marine mammals, the icthyosaurs and other aquatic reptiles developed vertical tails, even though like marine mammals they evolved from four-footed land animals. This may be because the legs/spines/gaits of land reptiles differ from those of land mammals, so that the earliest icthyosaurs swam with lateral undulation, as reflected in their spinal modifications.

This blog post by Brian Switek gives a really superb run-down on the issue, with figures and citations. I'll quote this part which deals with the dorsoventral undulation theory:

...mammals and their relatives were carrying their legs underneath their bodies and not out to the sides since the late Permian, and so the motion of their spine adapted to move in an up-and-down motion rather than side-to-side like many living reptiles and amphibians. Thus Pakicetus[the pre-cetacean land mammal] would not have evolved a tail for side-to-side motion like icthyosaurs or sharks because they would have had to entirely change the way their spinal column was set up first.

Switek goes on to to talk about exceptions in some marine mammals:

At this point some of you might raise the point that living pinnipeds like seals and sea lions move in a side-to-side motion underwater. That may be true on a superficial level, but pinnipeds primarily use their modified limbs (hindlimbs in seals and forelimbs in sea lions) to move through the water; they aren’t relying on propulsion from a large fluke or caudal fin providing most of the propulsion with the front fins/limbs providing lift and allowing for change in direction. This diversity of strategies in living marine mammals suggests differing situations encountered by differing ancestors with their own suites of characteristics, but in the case of whales it seems that their ancestors were best fitted to move by undulating their spinal column and using their limbs to provide some extra propulsion/direction.

I've thought about this many times but enjoyed theorizing on possibilities vs researching evolutionary theory. I like these thoughts above- def agree to certain extent- but it seems to me that: If almost all "fishes" utilize side to side motion/morphology, it seems that this is certainly more efficient, and would be adopted, over many millions of yrs...at least in some examples...by marine mammals; HOWEVER, there's one difference and physiological necessity that I believe actually may make the horizontal fluke/tail advantageous. This would make the vertebrae idea just a shaping mechanism in such evolution- instead of a restricting agent.

In order to breath -in order to do so efficiently- surfacing is necessary, thus vertical thrust is of the utmost importance. Esp, since other air-breathing marine species (evolved from land animals...) that have NOT evolved a solid fluke (whether by lack of evolutionary time, or prior morphological diffferences...) in most cases have a more flexible propulsion system to achieve efficiency via improved or altered maneuverability.

Certain pinnipeds- as discussed in article above- have less solid structures, thus improved flexibility/mobility and in my mind- going hand-in-hand with creating sufficient breathing efficiency. Then, in non-mammal instances, penguins are a solid example- as the use of "forelimb" (wings) create both the flexibility/mobility to achieve said necessities, but also... effectively acting quite similarly (in the vertical thrust department) to the horizontal fluke----in the process of surfacing to breath, porpoise, or reach land.

12
What are the frequency ranges of most marine mammal vocalizations?
8
Why do stranded marine mammals die so quickly?
6
What is the fastest marine mammal?
16
What made this black cluster on a leaf?
8
For fish, does a bony skeleton have any advantages over a cartilage skeleton?
11
Inexperienced divers damage coral, but parrot fish eating coral doesn't do damage?
2
Could you identify the species of this animal attaching to a fish in the Aegean Sea?
2
How could microplastics accumulate in the bodies of marine mammals?