How does Iota-Carrageenan achieve an antiviral effect?

"Cold Defence" nasal sprays are recommended to be taken either preventatively or in the early stages of a cold. The active ingredient in these sprays is Carrageenan. After some research, the active compound is Iota-Carrageenan (ι-Carrageenan).

This study by Eccles et al[1] shows that this drug is clinically effective. The study was only designed to test efficacy rather than to explain the mechanism, however. A fleeting mention is provided in the discussion section:

The above results suggest that the treatment with Iota-Carrageenan reduces the viral replication. Consequently fewer cells are infected, the immune reaction against the viruses is less pronounced and fewer symptoms occur. 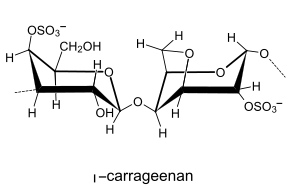 How does ι-Carrageenan produce an anti-viral effect?

Through two different pathways, one relying on a non-specific (innate) response, and another through a reactive oxygen species, the level of NF-kB(**) is amplified, as such a response would have happened as a result of the presence of the virus anyway.

In thousands of experiments, carrageenans have been used to induce inﬂammation, since inﬂammation is a predictable effect of exposure to carrageenan in animal and cell-based models. For the most part, these experiments were designed to test the effectiveness of anti-inﬂammatory agents or to study the mediators of inflammation

The innate immune pathway is mediated by toll-like receptor (TLR)-4 and B-cell leukemia lymphoma (BCL)10, leading to increased Interleukin (IL)-8 secretion by both canonical and noncanonical pathways of NF-kB activation. The ROS-mediated pathway of inﬂammation does not involve TLR4-BCL10, but requires Hsp27 and IkB-kinase (IKK)b, leading to increased phosphorylation of IkBa, and thereby enabling the nuclear translocation of NF-kB.

From the intro to:

(As an aside, the direct conclusions of this study are that these changes in GAGs may further influence transcription and play a role in determining cell fate, and perhaps may influence cell/cell interactions)

(**)NF-κB (nuclear factor kappa-light-chain-enhancer of activated B cells) is a protein complex that controls the transcription of DNA. NF-κB is found in almost all animal cell types and is involved in cellular responses to stimuli such as stress, cytokines, free radicals, ultraviolet irradiation, oxidized LDL, and bacterial or viral antigens wiki

In the publication by Leibbrandt et al.[1], it could be shown that the iota-carrageenan directly binds to viruses and thereby prevents the attachment to cells. This is a critical step in the viral life-cycle and therefore replication is reduced. Iota carrageenan rather acts unspecifically and besides influenza also other viruses such as human Rhinoviruses are inhibited[2]. Similarly, a direct binding to viruses has been shown for iota-carrageenan and papillomaviruses[3].

In contrast to lambda carrageenan that is widely used as proinflammatory compound in animal experiments, iota carrageenan lacks this activity and therefore a pharmacological / immunological mode of action can be excluded. In addition carrageenans have a high molecular weight which makes it very unlikely that it acts systemically.

Not the answer you're looking for? Browse other questions tagged pharmacology virology or ask your own question.

1
What is the effect of Montelukast on the amount of IgE in blood?
3
How does steroid dependence occur?
7
Why can't we find a broad spectrum antiviral drug to viruses like antibiotics to bacteria?
4
Effect of paracetamol or any antipyretic tablets
2
Does body fat percentage effect storage of fat soluble compounds?
2
Can (or have) antiviral drugs created drug-resistant viruses?
0
Effect of soap on the survival of non-enveloped viruses