If a gene altered causes cancer and creates a protein for cancer can the new protein be isolated in some way?

In the above title question, can the protein thats altered not be isolated (to separate out from other proteins) somehow? Is there nothing that can bind to the specific cancer proteins that will not bind to other proteins?

From how I read your question, you're wondering if there is some technology to somehow isolate oncogenic proteins inside the cell so they don't do harm, is that correct?

The answer is somewhat complicated, as it depends on the protein. First, though, you need to understand that cancer is a very complex disease, and cancer is not caused by a single mutation alone. The "multiple-hit" or Knudson hypothesis essentially states that a cell progresses from a normal cell to a cancerous one, accumulating multiple mutations along the way. In pretty much all cases, at least two specific mutations are needed - the constitutive activation of a proto-oncogene, a group of proteins responsible for cell growth and proliferation, and the deletion or inactivation of one or more tumor suppressor genes, which are used to keep growth and proliferation under control. This way, you have a tumor driver (often this is a single protein, like a growth factor receptor) "driving" the oncogenic process, with no "brake" or regulation.

As I said, mutations in tumor suppressor genes generally result in loss-of-function changes, or complete deletion/inactivation of the gene altogether, so "isolating" these proteins in the cell wouldn't do much good. The focus of many tumor therapies is to down-regulate, inhibit, destroy, or otherwise remove the function of the protein that is driving the uncontrolled growth and proliferation of cells, forming tumors and metastases. If we're lucky, the tumor driver is an extracellular domain-containing protein (like a cell-surface receptor) that can be identified and targeted from outside the cell. Once this has occurred, scientists and doctors can use specially-derived monoclonal antibodies to target and kill the cells containing these proteins: 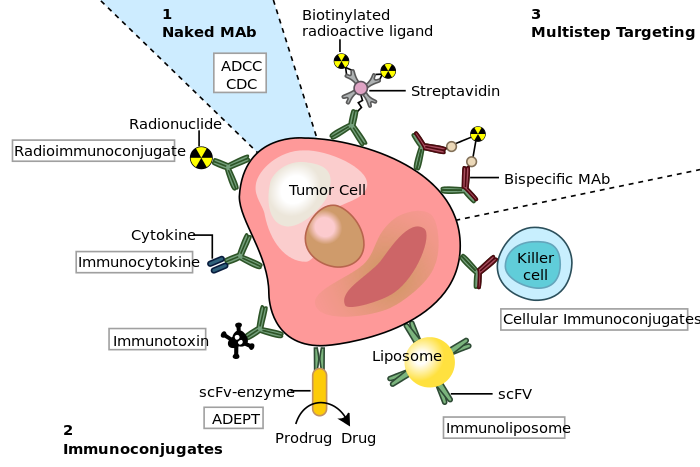 From WikiMedia Commons, released into the public domain.

There are a number of ways the cancer cells can be killed, from delivery of radiation or other cytotoxic compounds, to attracting killer cells from the immune system, to activating the complement system. However, all of these depend on the surface presence of biomarkers for the cancerous cells, so as to avoid non-specific killing or off-target effects.

The reason so much focus is put on killing the cancerous cells instead of trying to isolate the "bad guys" inside the cells is that by the time the cell has become cancerous, it already has accumulated so many mutations that a) the cell isn't really worth saving, and b) it would take an extraordinary amount of effort to corral all the mutated proteins together, and leave whatever unaffected or "wild-type" proteins were left to do their jobs.

You may recall that each gene we have (except for some on the X and Y chromosomes) is present in duplicate, one copy from our mother and one from our father. The initial mutations that begin the progression to the fully cancerous state may at first only affect one of those two copies of the gene, leaving a working version around for a while. However, as oncogenesis progresses, and more and more regulatory proteins are inactivated, chromosomal damage grows, and frequently the surviving "normal" copy is either mutated itself or completely destroyed. Once this occurs, even if you could isolate the misbehaving proteins, there would be no good proteins left to do the jobs of the cell. Therefore, killing is really the only option.

I hope I've covered what you were interested in. Please let me know if you don't understand any of it, or you can always ask a new question.

10
What role does a protein's size have on protein-protein interactions?
9
Circular mRNA to produce long proteins
9
How are we able to find the specific sites at which DNA binding proteins bind?
5
Why mutations in genes involved in general processes like DNA repair increase the risk of developing specific types of cancer?
4
Proteins in Milk, Oat , Eggs and Soy
5
Can we knock out Caspase-9 *and* avoid breast cancer phenotype in our mouse model?
3
Difficulty in finding protein inhibition drugs
2
Why is Bcl2 a good target for cancer therapy?
3
Do non-functional (‘junk’) protein sequences exist?
2
Assays for detecting RNA binding with protein