If there is more dopamine action in the mesocortical pathway in schizophrenia, then schizophrenics should always be in euphoric state. Instead, schizophrenics often lack motivation and do not experience pleasure. Why?

Short answer
The dopamine (DA) hypothesis suggests that excessive DA transmission in the mesolimbic pathway in schizophrenia leads to hallucinations and other positive symptoms. It explains the negative symptoms of schizophrenia (flattened affect, reduced motivation) by reduced DA activity in the mesocortical pathway affecting the frontal cortical regions.

Background
You are referring to the dopamine hypothesis of schizophrenia.

The initial dopamine (DA) hypothesis focused primarily on the positive symptoms of schizophrenia, namely the active psychoses, which includes periods of hallucinations and delusions. These effects can be attributed to hyperactivity in subcortical dopaminergic pathways. Specifically, excessive subcortical release of dopamine is thought to increase D2 receptor activation, disturbing the cortical pathway through the nucleus accumbens (Brisch et al., 2014), called the mesolimbic pathway (Fig. 1). These positive effects can be treated quite effectively with the classical, first-generation anti-dopaminergic antipsychotics such as haloperidol and chlorpromazine.

However, there is another important aspect on schizophrenia, which are the negative symptoms. While the full-blown psychoses occur in waves, these negative symptoms are a more continuous and persistent phenomenon. The symptoms include a flattened affect and dysphoria (reduced pleasure in life). These symptoms are thought to occur due to altered prefrontal cortex (PFC) functioning. Specifically, they are thought to be induced by hypoactivity in dopaminergic D1 transmission (Brisch et al., 2014) in the mesocortical pathway (Fig. 1). 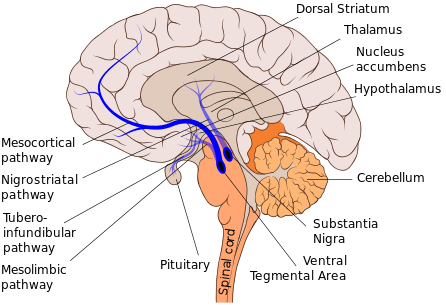 Fig. 1. The dopamine pathways in the brain, including the mesolimbic and mesocortical pathway, implicated in the positive and negative symptoms of schizophrenia, respectively. source: Wikipedia.

These two sides of schizophrenia point to an imbalance in DA activity in the brain, namely hyperactive subcortical mesolimbic D2 activity leading to positive symptoms, and hypoactive mesocortical D1 activity in the PFC resulting in negative symptoms. This imbalance hypothesis is the revised DA hypothesis and it is still an accepted working model (Brisch et al., 2014).

However, as noted by others, schizophrenia is a complex disease and it is thought that besides DA, also serotonin, glutamate and GABA play a role (Olijslagers et al., 2006). The current first line of treatment of schizophrenia are atypical neuroleptics, such as Clozapine. Clozapine is a selective monoaminergic antagonist with high affinity for the serotonin Type 2 (5HT2), dopamine Type 2 (D2), 1 and 2 adrenergic, and H1 histaminergic receptors. Clozapine acts as an antagonist at other receptors, but with lower potency. The broad effects of Clozapine are thought to underlie its potent antipsychotic therapeutic effect. It is believed it mainly works through a combination of antagonistic effects at D2 receptors in the mesolimbic pathway and 5-HT2A receptors in the frontal cortex. D2 antagonism relieves positive symptoms while 5-HT2A antagonism alleviates negative symptoms.

No. Schizophrenia isn't a single disease. It is class of psychotic disorders. Dopamine isn't the single cause of psychotic type diseases including schizotype. Many other pathways play a part in the various diseases; Serotonin, Glutamate, Histamine...ect.ect.ect. Genetic, Expressive and developmental factors are all known to play a role too.

Moreover you're not even describing typical symptomatic schizophrenia but a version of schizo that contains depressive features as well. Apathy caused by schizophrenia is a negative symptom a lack of interest in this life. Often we become preoccupied with the pleasures of delusions or hallucinations. The large dose of dopamine associate with a not "evil" hallucination is pleasurable on the order of cocaine. Delusions feel like antidepressants. Apathy caused by antipsychotics is entirely different.