Why do different humans look different?

Although farmers appear to be able to tell their cows apart, cows look very much alike to me. And this similarity in appearance seems to be a general trait across the animal kingdom: one individual of one animal species looks much like another.

Why do human facial and body shapes vary so much?

I understand that human beings live in many different environments (e.g. hot and cold) and have adapted to these (e.g. through lighter or darker skin color), but there seems to be much variation that has no apparent evolutionary purpose. So does the difference have a purpose in itself? That is, did we evlove to vary in appearance, and what is the purpose of this variation?

There is a substantial variation in some human traits: hair colour, eye colour, height, weight, skin colour, build etc. etc. HOWEVER there is also considerable variation within other species, to suggest otherwise is naive (though quite common). We often feel like there is more variation within our own species because we are more aware of the subtle differences within our own species (we have evolved to be able to recognise those that are more similar to us). Cows for example also have a lot of variation: 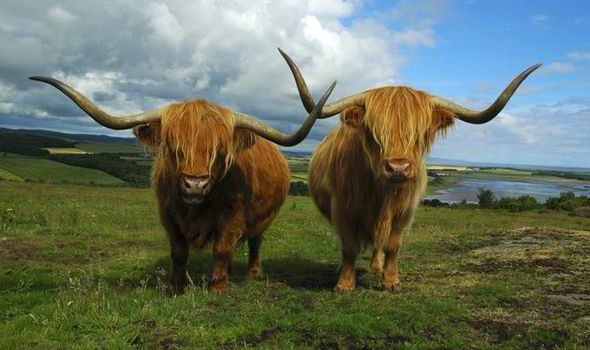 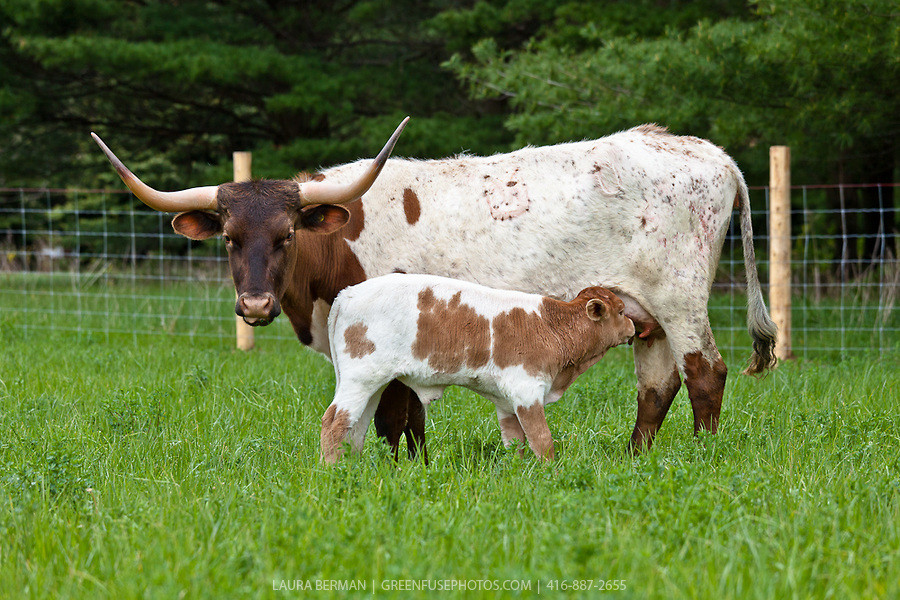 But to answer the question of why traits vary so much generally... There are two principle reasons that demographic patterns might evolve in traits (for example, "Why do Scandinavians tend to have blonde hair?" - [this is just an example, I'm not sure if blonde hair is actually more common in Scandinavia, it could just be a stereotype])

Firstly there is the selectionists view. This is the view that traits tend to evolve for some kind of adaptive reason, therefore most traits (and demographic patterns of variation) exist for some kind of purpose. A selectionist would argue that blonde hair offers some kind of advantage in Scandinavia, over other hair colours, that it doesn't in others. It could be a naturally or sexually selected advantage (perhaps blonde hair is more useful when hunting prey in snow, or there is mate preference for blonde individuals etc.)

In the 1960's though a scientist called Motoo Kimura proposed the neutral theory, a theory that most variation and traits have evolved by neutral processes. For example, scandinavians might be blonde because the humans that colonized Scandinavia were, coincidentally, blondes. Neutralists would argue that the demographic variance we see in humans, and within animal species, is due mainly to random genetic drift.

Here is some more on neutralist vs selectionist, and some on genetic drift. And just to show that other animal species also vary:

Here are some dogs (which have come under a lot of artificial selection specific to generating different physical variants)... 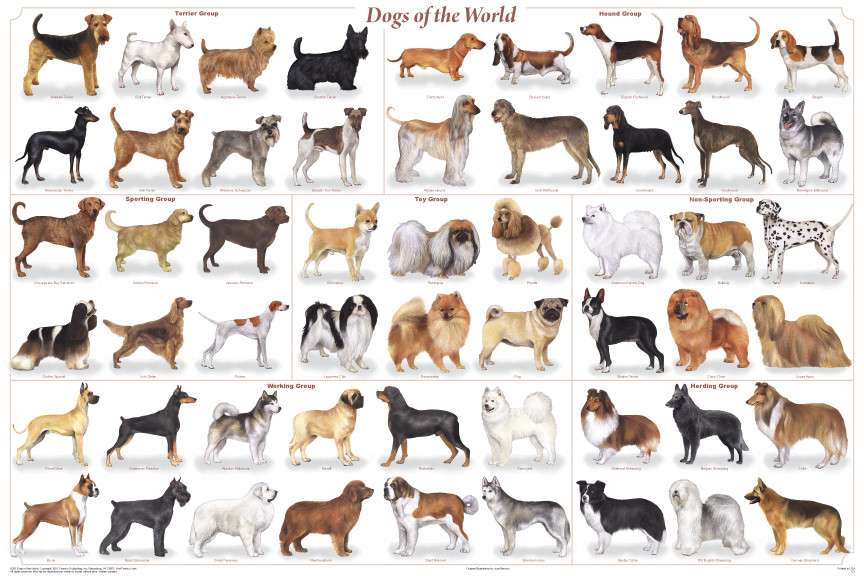 And here are some apes... 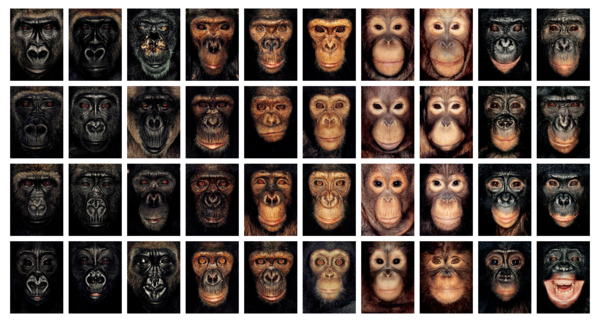 The answer by rg255 suggests that individual differences are the result of adaptation or genetic drift. That is, humans look different, because they lived in different circumstances.

While this may explain different skin colors (adaptation to different levels of sunlight) or hair color (accidentally more blondes settled in Scandinavia), it does not explain why facial shape differs in the way it does. Looking at skin or hair color, you would not be able to tell most people apart: there are millions of people with the exact same shade of skin or hair color. There is no individual skin or hair color. But there is an individual facial shape. It is very rare that you find two people (who are not twins) whose faces look so identical that you would confuse them. Facial shape distinguished human beings from one another in a way that hair or skin color does not. And while apes may have different faces as well, the distinguishability declines the further down you look at the phylogenetic tree.

According to a study published in Nature (Sheehan & Nachman, 2014; summarized in the Washington Post), distinct facial features did not evolve as adaptation to some environment, but because

identification of individuals was a necessity for our species.

Facial recognition is the prerequisity for human social relationships. And it is our social life that made us the dominant species on this planet. So, in a way different faces are adaptive, but not in the direct way that light or dark skin is. Facial indentification allows us to form a complex society with a wide variety of roles and finely differentiated relationships, and it is this complex society that allows us to create the culture and technology that in turn enables us to survive in all earthly (and a few extratrrestrial) environments and "have dominion over every living thing that moveth upon the earth".

2
Why aren't animals diverse in phenotype?
1
Facial uniqueness of some animals of the same species
1
Why only human have noticeable difference in face?
2
Questions about the evolution theory

23
Why can't humans drink sea water?
6
Why have humans evolved conciousness?
6
What determined the evolution of different faces in humans?
14
Why did humans become bipedal?
4
Why do Lapidaria margaretae look like stones?
5
Why are there so many different humans yet chimpanzees are just chimpanzees?
15
Are there animals that have evolved a resistance to human activity or encroachment?