Assume a patient with previous cardial infaction which SA node not possible to activate action potential anymore. However, SA trying to beat unsuccessfully repeatedly waisting energy. Therefore, I thought in this discussion about the possibility to stop Sinus node from trying to start action potential; which was deleted but the article about the SSS (sick SA) and remodelling is about its goal. The proposed treatment (laser ablation) of AF/AFL can backfire and cause SN (Sick Node) through remodeling. Assume there is no bypass of impulses through SA node.

I want to know if these pacemakers are in series or parallel. If they are in series, then laser operation can be dangerous to the SA node. The series connection is however the idea which I get from many schematic drawings: 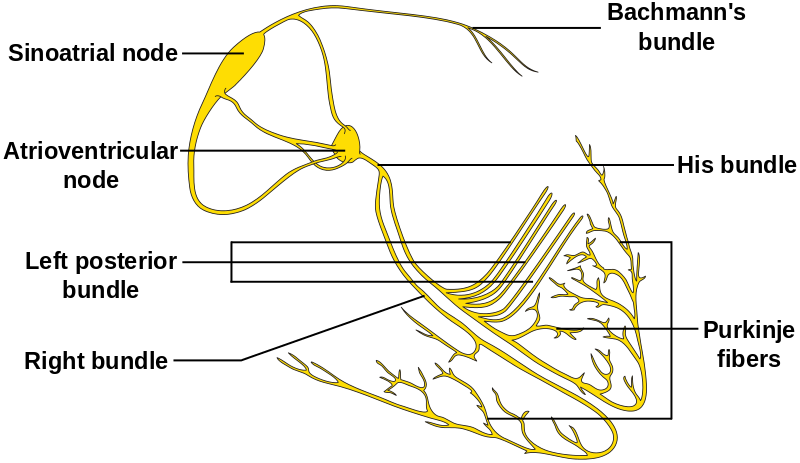 The SA node is not necessary for contraction of the heart.

The reason that this works is exactly what you mentioned: schematics.

They are in sequence, but within that sequence, there are multiple autonomous signal generators in the heart, where spontaneous depolarization occurs to initiate contraction: the SA node, the AV node, and the purkinje fibers.

The SA node fires the most rapidly, 60-90 times per minute - which is the average normal heartrate, because in most people the signal for contraction arises from the SA.

The AV node fires at 46-60 times per minute. If it receives the signal from the SA node then it depolarizes in sequence like the normal sequence we learn. But if there is no SA node signal received, the AV node will depolarize on its own.

The last "generator" are the perkinje fibers. If there is no signal from previous nodes, they will spontaneously depolarize. However, they depolarize VERY slowly, at a rate usually under 40 bpm. This severe bradycardia is potentially life-threatening, but allows the heart to keep some circulation going if there is a sudden complete AV node block - but prompt treatment is critical.

Regarding the lack of necessity of the SA node:

In fact, in some cases of supraventricular tachycardia (for example IST, see here) that are not responsive to conservative treatment, they will actually ablate (surgically destroy) the SA node in order to slow the heartrate down because a persistently extremely high heart rate can be dangerous.

It is debated whether the pathophysiology of IST and POTS results from abnormal autonomic regulation or abnormal sinus node function.

It is open research topic how the SA node should be ablated (removed) and how much. I did not find any meta-analysis about the issue.

Not the answer you're looking for? Browse other questions tagged physiology cardiology electrocardiography pathophysiology or ask your own question.

5
Are ectopic beats considered sinus rhythm for pNN50 purposes?
2
Do nerve cells cause action potential in cardiac muscle?
3
How does sepsis affect heart function?
0
Normal Frequencies in Heart
0
What is the name of the condition where no pacemaker cells are active in the heart for a short-time?
8
Can humans live without their right atrium?