Some species have different numbers of chromosomes, as we all know. Throughout evolution, how was a species able to survive with an extra chromosome? How was this organism able to breed successfully to form offspring with the additional chromosome?

Chromosome splits (or fusions for that matter) might not mean that much for reproductive success since genes can still line up and recombine. To quote the science blogger P.Z. Myers:

[C]hromosome numbers can change dramatically with no obvious effect on the phenotype of the organism.

He illustrates it thusly: 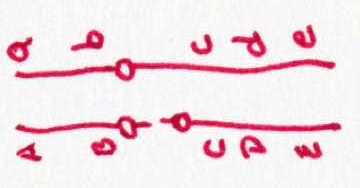 So to answer your first question, changes in the number of chromosomes aren't always fatally deleterious (as you seem to think).

As for how a change in chromosome number might spread, the explanation is likely random drift and inbreeding. To quote P.Z. Myers again:

So our two chromosome individual will have a reduced fertility as long as he or she is breeding with the normal one chromosome organisms, but those split chromosomes can continue to spread through the population. They are not certain to spread — they’re more likely to eventually go extinct — but by chance alone there can be continued propagation of the two chromosome variant.

"Evolution" by Mark Ridley, p. 361 similarly points out that reproduction will be an uphill battle until the new variant becomes more common (often through inbreeding or drift in small populations):

When a new chromosomal fusion mutation arises, it will be selected against because of its disadvantage in heterozygous form. But if it drifts up to a locally high frequency, as may easily happen in a local, small, and perhaps inbreeding, mouse population, natural selection will favor it. Natural selection favors whichever chromosomal form is locally common[.]

This might in the end lead to speciation due to the two populations becoming incompatible.

15
Evolutionarily speaking, why do humans have 46 chromosomes
4
How are new chromosomes replicated into the next generation via sexual reproduction?
3
Have we ever observed fertile offspring with a different number of chromosomes than the parents?