If all B cells are present at birth, why should the primary response to an infection take longer than the secondary response?

When learning about the immune response, my teacher mentioned that all the bodies B cells are present at birth, and there is one to counter every disease. But if this is the case, why should the primary response take a long time?

As far as I know, the primary response involves the non-specific response followed by the specific response, where APCs cause the activation of T cells resulting in clonal selection and expansion of T and B cells. The B cells then differentiate into plasma cells and produce antibodies. It results in the memory cells being produced, which can quickly reengage the specific response the next time the pathogen enters.

Why doesn't the body just make memory cells to begin with? As if it has already encountered every possible pathogen. I presume it is just a lack of specificity in the A level teaching, but I am curious to know what I am missing here.

These so called virgin B-cells (becase they never had contact with their antigen) which are present in your body only have random B-cell receptors (when secreted, these are the antibodies), mostly of a relatively low binding affinity. These B-cells undergo division, re-arrangement and somatic hypermutation of the B-cell receptor and clonal selection. Only cells producing high-affinity antibodies survive this selection process and build later the pool for the memory cells and the plasma cells. It is like in the image below (from here): 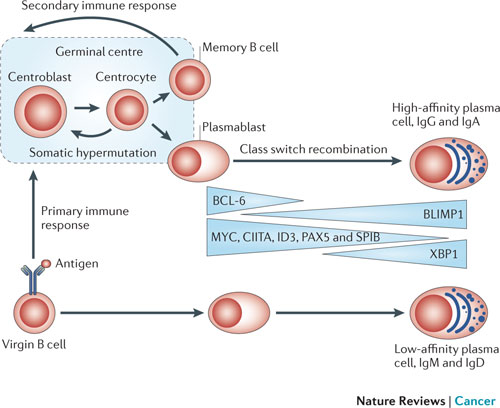 Using this approach we have a big pool of low affinity antibodies (which somewhat fit). These are then used as the basis for the elaboration of a population of high affinity (perfectly fitting) antibodies, which target only the pathogen. And the antibodies are available relatively fast.

This is a great question, Jamie. And Chris gave an excellent answer above, describing how antibodies go through 'germinal center reactions' that improve the affinity of responding cells. However, Jamie actually brings up several concepts that are worth discussing and there is another important element to the immune response that Chris touches on, but could be elaborated.

Briefly, (1) B Cells arise from progenitor cells living in the bone marrow. They are produced continuously throughout the life of the organism - or at least until 'old age' when hematopoiesis is qualitatively and quantitatively compromised(Gerstein and Cancro, among others address this problem).

(2) How many? That's a good question. The number of cells seems to be dependent upon the mass of the organism (indirectly through a cytokine called BLyS). There are a lot of subtleties governing the number and 'quality' of our cells that BLyS concentration seems to regulate, but, for the most part, we can assume that each B Cell (like each T Cell) reacts to a different target (epitope). The reason I bring up the BLyS thing is that it shows us that 'space' is limited, and the body is making decisions all the time about what cells to keep and what cells to discard.

(3) During an immune reaction, some small subset of cells 'sees' its target via it's B Cell Receptor (this is a surface-bound version of the antibodies that this cell will make later). Most cells will remain blind to the infection / whatever. The ones that do see their target expand (multiply), while those that don't, don't. This is Burnett's Clonal Expansion Theory (probably best explained by Wikipedia) and it states that we have only a small number of cells that are useful for each immune reaction, but these can divide and activate rapidly to participate in the response. When the infection is over, most cells die, but some subsets will remain, these are memory cells and their relatives (e.g. long-lived plasma cells). Imagine that for every unique B Cell you had before, now you have 100 memory cells (I'm making up that number) that are capable of responding to the same target. Although I'm sure there are differences between these memory cells and naive cells, it's easiest to ignore that part and just think that now you will be starting with 100x the number of cells you had prior to the primary response.

So, to get to your basic question: why not just start with the memory cells? It's a question of space. Your immune system provides you with a broad repertoire because it has no idea what it's going to see during your life. But once it sees something once, it is ready for a second showing. (i.e. It is reasonable to think that if you have micro-organism X in your neck of the woods, you may come into contact with it more than once, so after that first time, you are now better prepared with more cells that already demonstrated that they were helpful once before. )

10
Why is there an extended delay before G.M. liver cells are attacked by the immune system?
2
How HIV Affects and Its Treatment using Combination Therapy
3
How do B memory cells provide immunological memory? Do they differentiate into plasma cells?
14
Why does the protection afforded by some vaccines last longer than for others?
3
Where do the antibodies that trigger the specific immune response come from?