How were the first primers made?

I keep reading about how primers are useful in pcr -- they allow you to select a specific dna region. Similarly, in NGS or Sanger sequencing they give you a starting point. The primers I see are about 20-30 bases long.

However, how were the first primers developed? Somewhere, someone needed to come up with a 20-base sequence that bound to a specific part. Aren't there 4^20 such combinations? That's a lot of potential options to test.

How was that done?

dna-sequencing genomics rna-sequencing
share|improve this question
edited May 9 '17 at 19:35

The MIT synthetic chemist Gobind Khorana won the 1968 Nobel Prize in Chemistry for his work which successfully was able to make chains of Ribonucleic acids. The chemistry was difficult at the time but he won the prize for making specific sequences of RNA bases which were then fed to cells, resulting in specific amino acid chains, which ultimately deciphered the specific base to amino acid correspondence of the genetic code.

Khorana was only one of the chemists who worked on nucelotide synthesis, but the technique overall is simple and since nucleic acid polymers are only unbranched polymers, any sequence combination is easily obtained. Each sequential reaction adds one base. Repeat the reaction as many times as needed. 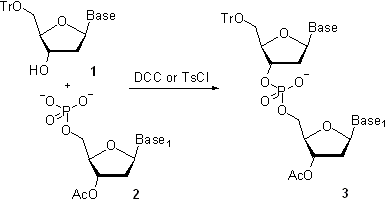 The chemistry Khorana devised was refined and easily extended to DNA polymers since the linkages are identical, the difference between DNA and RNA is only a single alcohol (-OH) group, which is not directly involved in the bond between the nucleotide bases.

By 1983 when Kary Mullis concieved the idea of PCR, short sequences of DNA and RNA could be synthesized on commercially available machines. In fact Mullis was responsible for just such a machine at Cetus Pharmaceuticals and had been trying to find a way to increase demand for his services.

The PCR oligos were the easy part of the operation. To prove the concept, the team at Cetus used a conventional DNA polymerase and add it to the PCR mix after every cycle. By 1986 the Cetus team had succeeded in performing PCR a heat tolerant DNA polymerase from Thermus aquaticus, a bacterium from a hot spring, which basically made it the technique we still use today.

The process of sequencing was, and can be, assisted by cloning a DNA fragment into a known site in a plasmid designed to help sequencing. That cloning site is flanked by a known sequence(s) that can use standard primers 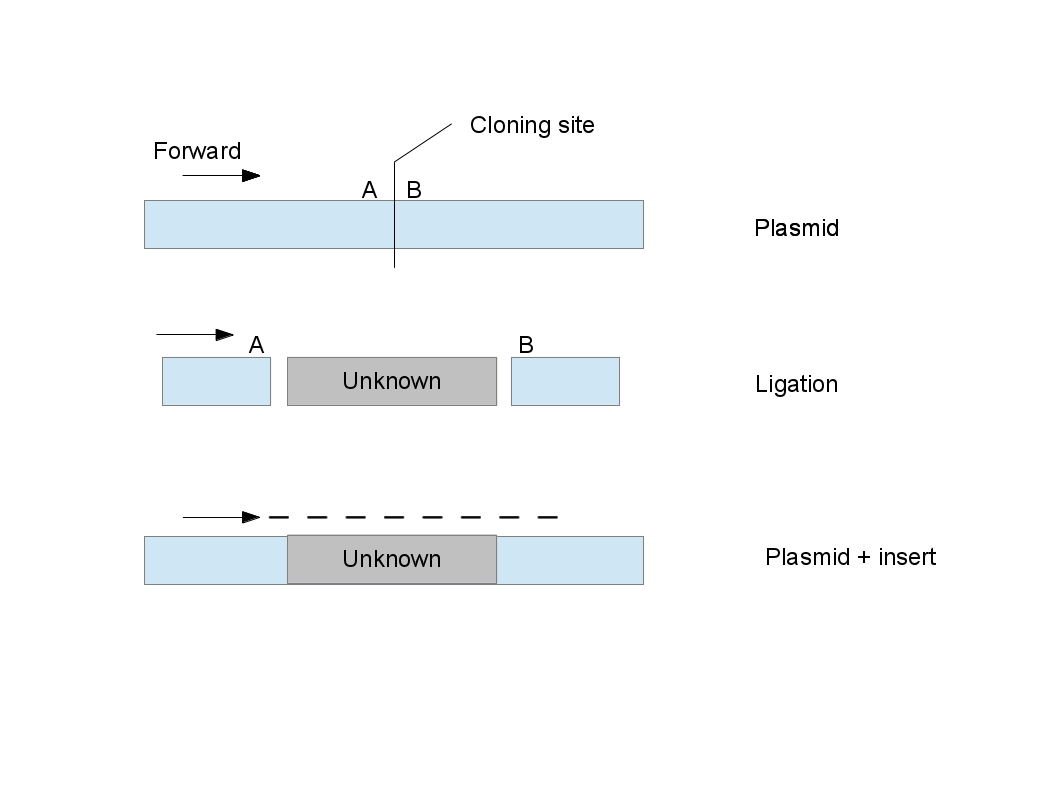 In the figure "A" and "B" are just reference points on either side of the Cloning site. Of course, the plasmid extends on either side of the shown region. The plasmid is first cut open at the cloning site (upper step) and the unknown DNA fragment ligated in (middle step). Then the known 'forward' sequence can be used, with a complementary primer (shown as the arrow), to prime a sequencing reaction (lower step, dashed line). Additional modifications include (per @Chris) preparing the insert with adapters or using a plasmid with sequence that binds a 'reverse' primer (on this figure, that would be an arrow on the right hand side of "B" and pointing to the left). The reverse primer allows sequencing of the opposite strand to the forward primer and gives access to the 3' end of the inserted unknown sequence. In the early days of Sanger sequencing read lengths were quite short and often were unable to run the length of a larger insert.

Sequencing plasmids are designed so that their forward and reverse primer binding sites are unlikely to contain any sequences that may be found in the insert. Because these known primers can be used in this manner to sequence almost any insert, they are often called Universal Primers (per @AlanBoyd).

Not the answer you're looking for? Browse other questions tagged dna-sequencing genomics rna-sequencing or ask your own question.

2
In genome research, what is the problem in Mapping that may be caused by reads being too short?
0
Solid mouse (C57BL/6) WT primers
2
How do carrier RNAs increase yield in sequencing experiments?
0
Which is the proportion of metagenomics reads that cannot be mapped in any genome?
1
How exactly are gaps defined in genomics?
0
What determines the amount of data you would get from a sequencing experiment?
1
How to design internal primers?
4
Quantifying DNA in a band on gel electrophoresis