Why doesn't the cytosol dissolve the polar structures?

we know that cytoplasm of cells are filled with water molecules and other hydrophilic molecules so my question is why the water of cytosol doesn't dissolve the ionic part of the lipid bilayer or why it doesn't dissolve the proteins and enzymes which are most polar and ionic and they still form structures,organelle and function and suspended in water?

Many cell components are not simply hydrophobic or hydrophilic, but have dual affinities. Proteins typically have structures which result in the interior of the protein being hydrophobic and the exterior, which is exposed to the water in the cytosol, being hydrophilic. Thus, differences in polarity between different regions allow proteins to be dissolved in the cytosol while still maintaining a stable structure.

Water can disrupt the intramolecular hydrogen bonds by bonding to the donors/acceptors. However, water in many cases can also act like a bridge and stabilize the protein structures. As already pointed out by jarlemag, the hydrophobic residues can push the water out of the pockets where intramolecular hydrogen bonds are to be formed. You may notice that the cores of the proteins are mostly hydrophobic while the surface is hydrophilic. So water plays an important role in the maintenance of the structure. Therefore many proteins need the assistance of chaperones to fold into a stable structure; once folded they maintain their structure while remaining suspended in water (I use the term suspended because proteins don't form true solutions: they form colloidal mixture). Chaotropic agents like urea exert their denaturating effect by disrupting hydrogen bonds as well as by increasing the entropy of the water molecules around the hydrophobic regions and thereby reducing the net hydrophobicity.

(I hope it is clear now)

This answer doesn't add anything to the others, but is an attempt to explain using different language.

In a sense, it does. See my diagram below The bilayer is composed of phospholipids, classic amphiphiles with a polar head group and a nonpolar tail group. The polar head group can interact favourably (in a thermodynamic sense) with the cytosol through hydrogen bonds. In contrast the hydrocarbon tails cannot interact with water through hydrogen bonds. This means that they force a structure on the surrounding water which decreases entropy of the system (unfavourable). The thermodynamic solution to this is for the bilayer to form - this maximises the interactions between the head groups and the aqueous surroundings and minimises the unfavourable interactions between the tail groups and the solvent. A beneficial side effect is tha the close packing of the tail groups maximises van der Waals interactions between them.

On balance the 'ordered' nature of the bilayer is stable because it is paid for by increased disorder of the solvent and favourable interactions between the hydrocarbon tails.

Exactly the same arguments apply to proteins: proteins fold to minimise the exposure of nonpolar amino acid side chains. 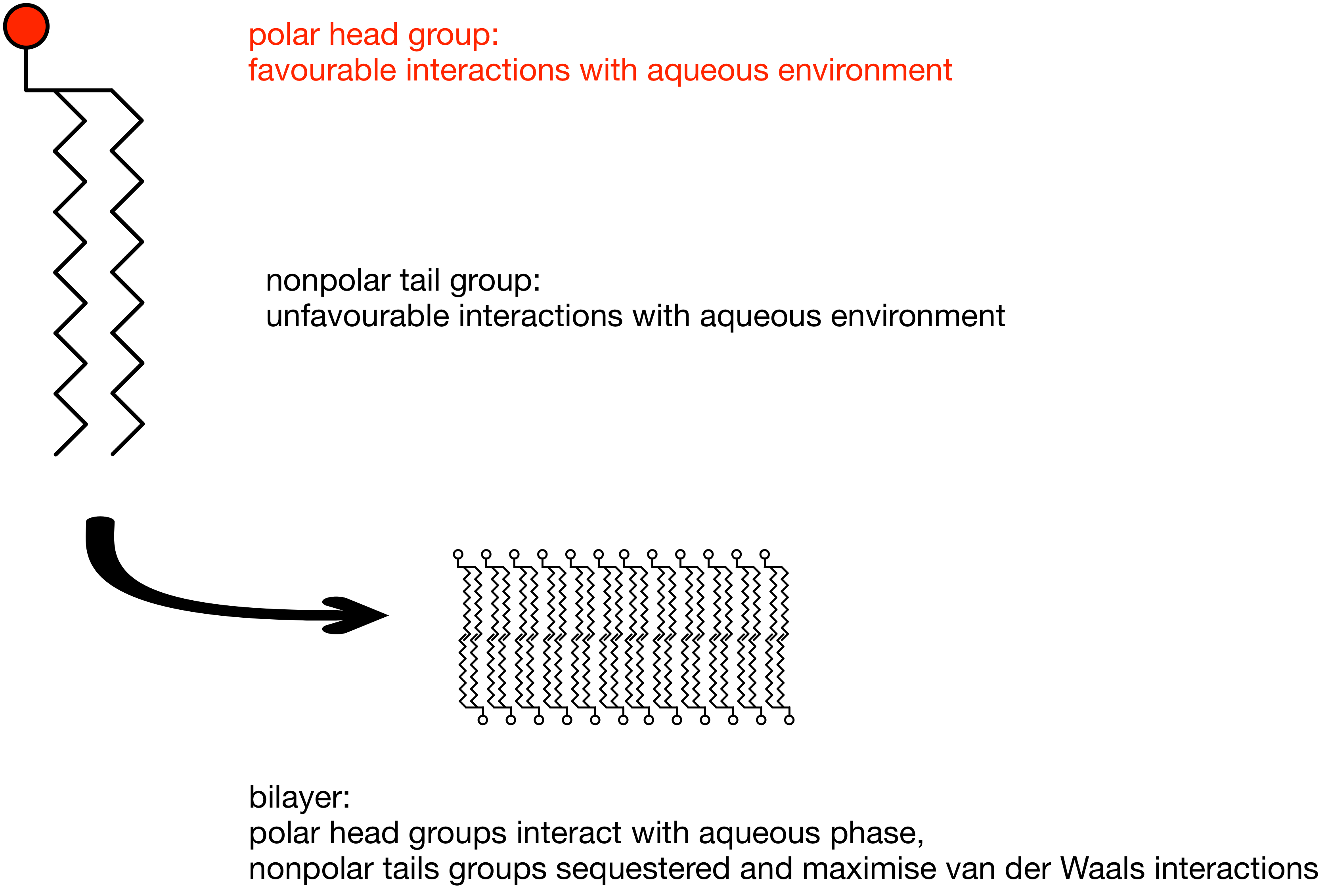 Not the answer you're looking for? Browse other questions tagged molecular-biology cell-biology cell or ask your own question.

5
Simple diffusion of lipid-soluble molecules through phospholipid bilayer -- does anything get "stuck" in transit?
4
How do detergents get in hydrophobic membrane interior?
2
Structure of biological membranes?
7
Permeability of Plasma Membrane
8
Why should phospholipid non-polar tails be "protected" in the membrane bilayer?
2
Are glycoproteins and glycolipids present only on the cell surface membrane?
13
What is the difference between cytosol and cytoplasm?
2
Do all transmembrane proteins contain channels or tunnels?
11
Why don't the heads of phospholipid bilayers repel hydrophobic molecules?