How does tree resin capture arthropods?

Isn't tree resin very slow moving, for instance maple sap has an extremely high viscosity and therefore how does the resin engulf both an arthropod, such as a spider, quick enough for it to not move away from the slowly moving amber?

I believe it is more of the fact that the organism gets stuck to the residual resin on the plant itself, and becomes encased and later fossilised in the amber.

A host of bugs, fungus and other life forms have been found trapped in amber from the time of the dinosaurs. Bugs can become encased in amber if, while alive, they get stuck in the resin.

Although plant resin is slow-moving, the bug stands to be encased in it if it is already stuck to the tree itself, as there is a large amount of resin on the surface of the plant. If they are crawling over the plant, or land on the surface, they would become stuck and later encased. It would be similar with other organisms as well, as plants and other organisms have been discovered preserved in this way.

These fossils represent some of the earliest African fossil records for a variety of arthropods, including wasps, barklice, moths, beetles, a primitive ant, a rare insect called a zorapteran, and a sheet-web weaving spider. Parasitic fungi that lived on the resin-bearing trees were also found, as well as filaments of bacteria and the remains of flowering plants and ferns. 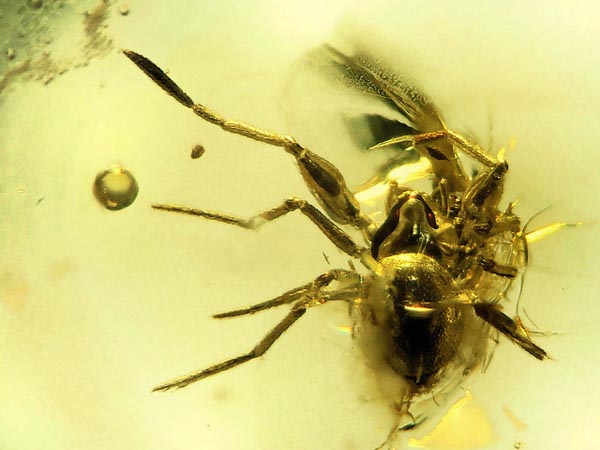 8
How to determine whether a newly discovered dinosaur is not a young one and not an entirely different species?
5
How big can cold-blooded animals get?
11
How did aquatic dinosaurs go extinct?
7
How can soft tissue exist in dinosaur fossils?
11
How could this fossil's soft tissue be preserved so well?
2
How did palaeontologists discover the age of the Tyrannosaurus rex named Sue?