In practice, when you have vasoconstriction of the glomerular capillaries and subsequently an increase in blood pressure, glomerular filtration rate increases. However, this seems counterintuitive to Bernoulli's principle.

During vasoconstriction, because the radii of the capillaries are getting smaller, we should expect an increase in flow rate and blood velocity. According to Bernoulli's principle, the outward hydrostatic pressure should drop.

How does this lead to an increase in filtration rate?

The previous answer isn't quite correct, because, well, blood flow is complicated and the body has autoregulatory mechanisms. As Alex mentioned, vasoconstriction doesn't occur in capillaries because they lack a muscle layer. It does occur in the small arterioles before and after the glomerulus (the afferent and efferent arterioles, respectively).

Bernoulli's principle mainly applies to larger arteries and arterioles, and not capillaries. Capillaries are so tiny that the red blood cell is a significant portion of the diameter, so the assumption of no viscosity is no longer valid. See this discussion for an explanation.

To address your question, here's a basic picture of the glomerulus, from Gray's Anatomy. 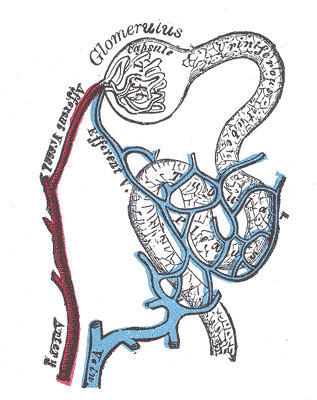 The afferent arteriole is in red, and the efferent arteriole in blue. The glomerular filtration rate (GFR) depends on the pressure difference between the two, which affects the hydrostatic pressure at the glomerulus. Also, note that vasodilation has the opposite effect of vasoconstriction on GFR. (For a nice image and explanation, look at Figure 6 here) So:

To my knowledge, capillaries in general and the renal capillaries in glomeruli in particular do not have muscle cells to constrict. The latters have only a basal layer with podocytes lying directly on it (link to the open textbook).

For more details, please, refer to the textbook I provided the link to above.

Not the answer you're looking for? Browse other questions tagged homeostasis renal-physiology or ask your own question.