How does a person get AIDS?

I am inquisitive to know about how a person contracts AIDS. Among the common masses it's still the belief that having sex with multiple partners causes the disease but that is not the case when read online that it can come only from persons carrying the virus.

So, if a person (male or female) is carrying the virus (HIV positive) does it mean that he/she is suffering from the disease or the person may be carrying the HIV disease and still be free from AIDS. If so how did this chain reaction of spreading the virus start?

You read right: it can only come from people already infected through:

Having unprotected sex with multiple partners statistically increases the risk of stumbling upon someone infected.

A person carrying the HIV virus may not show symptoms of AIDS, because the HIV infection passes through a stage of clinical and symptomatic latency (the asymptomatic HIV or chronic HIV) which can last up 20 years (average of 8 years) when only uncommon symptoms like fever and weight loss show up.

Where it started? It is believed that HIV originated in non-human primates in West-central Africa and were transferred to humans in the early 20th century. The virus adapted and became strong, because the virus from primates is typically suppressed by the human immune system within weeks of infection.

HIV is a retrovirus that primarily infects components of the human immune system such as CD4+ T cells, macrophages and dendritic cells. It directly and indirectly destroys CD4+ T cells.

So it destroys the cells reponsible of its removal from the human body. Hard to believe that there are people whose immune can really destroy the virus. A virus lives inside the cell it parasite, so the immune cells must destroy one the other. Also the virus infects and kills them (the good ones). However, as MattDMo suggested an infected person may take antiretroviral drugs and the disease progression can be slowed down.

Being HIV+ and having AIDS are slightly different terminologies:

If the virus is detectable in an individual by existing medical techniques he/she is called HIV+.

A HIV+ person is said to have progressed to AIDS only when the CD4+ T-lymphocyte count drops below 200 cells per ml of blood.

Cornelius has nicely summarized the infection routes so I wont touch on that.

Yes. In some people the progression from HIV+ to AIDS is very slow and they practically lead a normal life. Such individuals are called long term non progressors (LTNP). Some genetic reasons for having an LTNP phenotype is summarized in the link, however, this topic is still under active research.

Some individuals just don't acquire HIV. This is because they lack the CCR5 chemokine receptor which is essential for HIV entry into the cells. Deleting this receptor is also being considered to cure AIDS via a stem cell therapy.

Cornelius covers Primary Infection and some of Dissemination. Wysiwyg covers some reasons when HIV cannot proceeds to AIDS. Little however is discussed yet exactly about the Pathogenesis - how HIV proceeds into AIDS.

There are many stages: 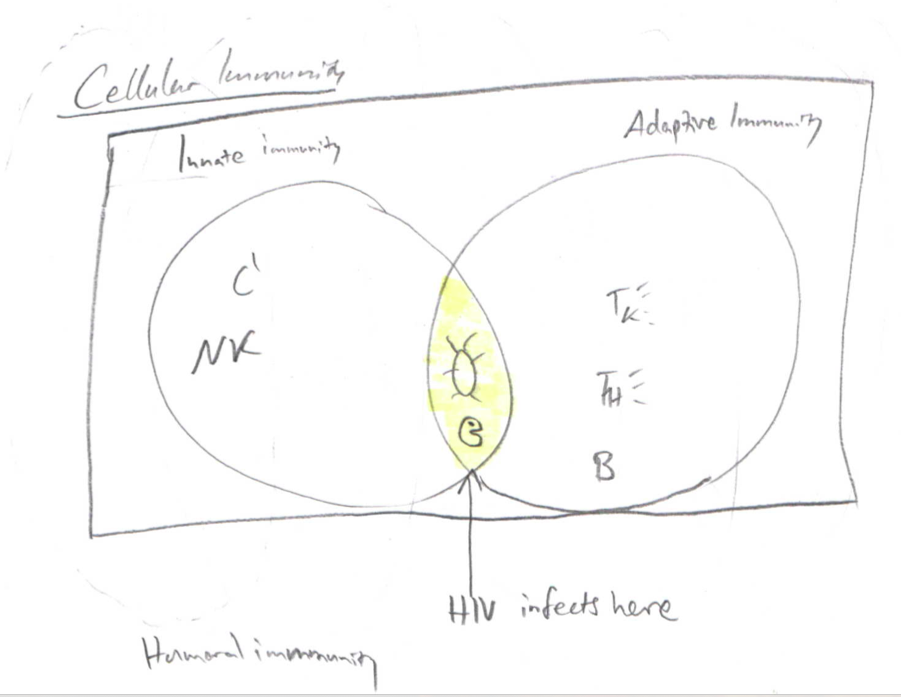 These APCs act as reservoirs for HIV virus in the body during latent period and after the latent period. However, there is very active replication of the virus also during the latent period in these reservoirs. The virus replicates actively in lymphatic system. This is why you see steady level of HIV virus in blood during first eight years, see Figure below [Fitzpatrick's Color Atlas and Synopsis of Clinical Dermatology, 7e > Section 27. Viral Diseases of Skin and Mucosa]. 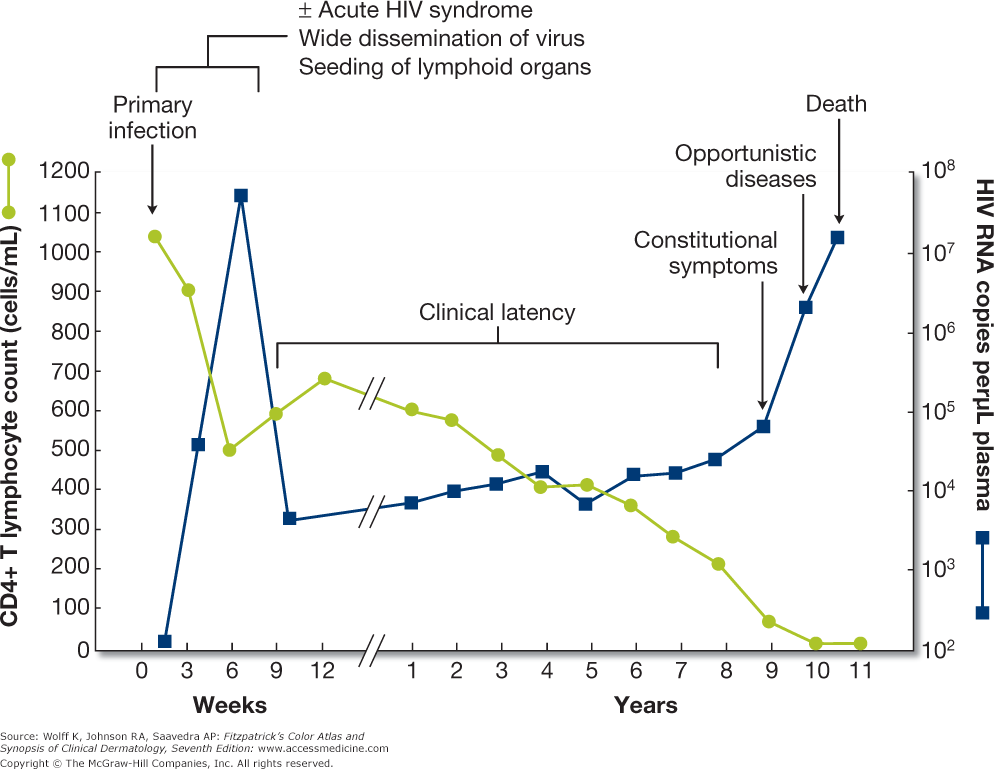 The structure of lymph nodes is disrupted eventually. There is a degeneration and loss of virus holding function. Virus leaks into the blood which can be seen as increased viral load at about 7-8 years after infection when constitutional symptoms start. This amount of virus is very large that is released into circulation. There is a rise in viremia. Now the infection becomes T-tropic (proliferates and replicates actively on CD4+ T lymphocytes), while it was M-tropic (proliferates and replicates actively on APCs in lymphatic circulation) until the start of AIDS. Actually, these APCs play a major role in trapping the virus, until their architecture changes.

Some antiviral drugs work on these CD4+ cells i.e. at least macrophages coupled with MHC II complexes. There is still much unknown in the pathogenesis of HIV:

and there exist no antiretroviral drug which can target the major antigen presenting cells or use another way - to stop viral replication completely.

Not the answer you're looking for? Browse other questions tagged human-biology hiv aids or ask your own question.

-3
Can a person be infected with HIV viruses without contacting them by person-related stuffs?
11
Is there an 'anti-virus'?
7
Can HIV be transmitted via breastfeeding?

2
How HIV Affects and Its Treatment using Combination Therapy
3
It is possible for person with AIDS be negative for HIV antibodies?
5
Can people with AIDS get tattoos?
9
Can people with AIDS get a fever?
3
Are Young Girls Stronger than Young Boys?
103
Can HIV be transmitted via mosquitos?
6
When was it understood that a male haemophilia sufferer can't pass it on to his sons?