What are the functions of disulphide bonds?

What are the functions of disulphide bonds between amino acids in proteins or peptides?

biochemistry proteins amino-acids
Share
Improve this question
edited May 6 '14 at 12:28

Disulfide bonds form between different amino acids of a protein chain and the help to stabilize and maintain a distinct three dimensional form. In principle this looks like this (pipcture from the Wikipedia page on Disulfide bonds): 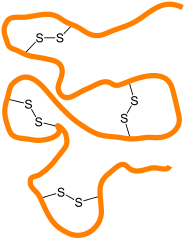 Disulphide bonds (or bridges) can also hold different subunits of larger protein complexes together, one example for this would be antibodies. Here the light and the heavy chains are connected by disulfide bonds, they also play a role for maintaining the structure of the single protein chains (image from here): 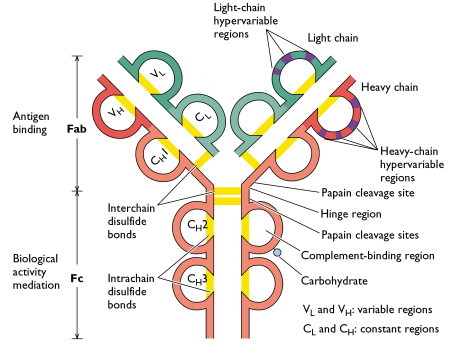 Disulphide bonds occur in proteins, not amino acids, although they involve a covalent bond between two amino acids (both cysteine).

The received wisdom is that disulphides are used as extra stabilisation of the structure of proteins which are secreted, or which have an extracellular domain. It's important to get hold of the idea that they do not occur in the cytoplasm, but are only formed in proteins which pass through the secretory pathway: they are formed in the endoplasmic reticulum (ER), and there are resident ER proteins (protein disulphide isomerases) whose function is to assist in their formation.

Cells also contain the tripeptide glutathione which includes a cysteine residue. the ratio of oxidised (disulphide bonded dimers) to reduced (monomers) glutathione helps to set the redox state of the cytoplasm and the lumen of the endoplasmic reticulum.

7
How to compute properties of peptides ?
4
Are There Rules for How Proteins Are Formed?
3
Thermodynamics of Forming Peptide Bonds
4
Amino acid compatibility
2
Are all dipeptides synthesizable?
11
How do disulphide bonds in hair cause curling?
4
What would be the fate of protein made from D-amino acids after ingestion by humans?
5
Backbone hydrogen bonds between adjacent amino acids in a protein?